I’ve been a staff member at Diana’s Grove Mystery School for the past two years (and a member of that community since 2006), and recently I made the decision that it was time to step away from that role. Lots of reasons why that’s true, none of which are immediately germane here. But earlier this week, I had the final ‘official’ meeting with an amazing group that I’ve been mentoring in leadership, community and ritual arts, and facilitation skills. That work has been a highlight not only of my time in Mystery School, but a highlight of my life during the time that I’ve been doing it. Fresh off the bittersweet experience of saying goodbye, I did my second tarot draw.

Question: What should I consider as I exit my role in my current spiritual community? 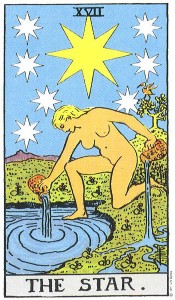 First impressions: “Damn it, a Major.” Clearly I shouldn’t have expressed my gratitude for having drawn a non-major, non-court card the first time. On the other hand, this is a card I don’t know much at all about, so of the majors it’s not a bad one to end up with.

About the card: Okay, so let’s look at this thing. I see a nude woman with blonde hair. She’s down on her left knee, with her right foot resting on the surface of a lake. She’s also pouring water out of two jugs – one into the lake, and the other onto the ground nearby. The water being poured onto the ground is going in a few directions, including a small trickle that’s feeding into the lake.

In the background, there’s one tree with a bird in its uppermost branches, and a mountain range way off in the distance. In the sky, there are eight 8-pointed stars – seven smaller ones and one big damn star in the middle. My brain wants to make the large one the Sun, but given that this card is The Star, I’m going to resist that impulse on the assumption that it’s stupid.

Some other things I notice, here: First off, the woman is huge. It could just be perspective, but I don’t think so – she looks like a giant. Clearly not just a random woman traipsing through the countryside with a couple of water jugs. Second, the water being poured out onto the ground isn’t going the right direction. I mean, part of it is trickling into the lake, but more of it is moving in other directions – including uphill. Finally, there’s the fact that the woman’s foot is resting on top of the lake – not in the lake, on top of it. That seems kind of important.

The story without words: With only one person in the image, it’s harder for me to see a narrative in the card. I’m struck by the fact that the woman is doing something that seems ridiculous, though, in watering the lake. I mean, most people don’t go to the lake and add water to it, right? It’s usually the other way around. One thing I “know” about the Tarot is that an unclothed form symbolizes vulnerability. I tend to translate that as “purity,” instead. Maybe this figure is watering the lake and the ground because at her heart, that’s what she does – she brings emotional connection with her wherever she goes. Whether it’s “needed” by the lake or not is immaterial to the fact that this is who she is and what she does.

But what does it mean?: Through this lens, I’m aware that I’ve compartmentalized my life in some ways that I’m not thrilled with (that’s part of the larger purpose of this new site, to bring more of those compartmentalized parts of my life together, but that’s a topic for a later post). I tend to see myself as a leader, a mentor, a ritual artist, a partner, a writer…all of these things, but any one of them only in certain limited contexts. I find that I often wouldn’t really think of bringing my gifts to a place where they seem like they either don’t fit or are already present. Perhaps like the woman in this card, I would do well to have fewer barriers between myself and the world that surrounds me. Maybe the point of offering my self isn’t to find the perfect venue where that self is most needed or will be most appreciated, but simply to offer those gifts wherever I go.

This all feels like a very tenuous connection to the card itself. I have a feeling I’ll be coming back to this one again to see what else comes up for me.

Some music makes me cry