Well, it’s 2012. Now begins the period of time where the nights get colder, good Chicagoans have reason to complain about the weather, and I write the wrong year on my checks for the next couple of months. Happily, this time of year lends itself to a rather obvious focus for a tarot draw. So, let’s do this – tarot draw #6, at last.

Question:What card will be an ally in the coming year?

Card: The Wheel of Fortune 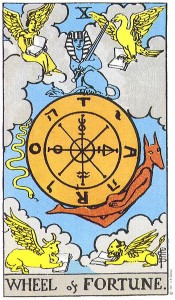 First impressions: Um. Shit. My lack of expertise in the Tarot is, I think, well-documented here (enough so that I’m tempted to create a template along the lines of, “I don’t know a damn thing about these cards, but…” to go with each post), but even I have some reaction to this card. When a friend who’s inclined to tell me what their year card is tells me that they’re entering a Wheel year, I know enough to shake my head and say, “Oof.”

About the card: There’s a lot going on in this card. Let’s start in the middle and work our way to the edges. In the center of the cards is, um…a wheel. Go figure. There are a number of symbols on the wheel that I have to confess I don’t recognize at all. A sphinx is atop the wheel, holding a sword. On the left is a snake, and to the lower right there’s an Anubis-like creature. In the corners of the cards, in the clouds, we have four winged creatures – a lion, a bull, a bird that I kind of want to call a phoenix and a person (my Catholic upbringing wants me to call any person with wings an angel, naturally). Each of these creatures has an open book.

The story without words: With the center of the card dominated by a non-living image, I don’t get an immediate story to attach here. I’m sort of intrigued by the creatures in the corners, though. I note that none of them appears to be writing in the book they hold, which leads me to conclude that they’re reading instead. Either that or they’re each holding a book and wondering, “Why the hell am I up in a cloud with an immense wheel in front of me? Also, is that sphinx going to whack me with that big damn sword?”

But what does it mean?: So what I “know” about the Wheel is that it symbolizes change. There are things that happen in the world that we can’t control. Many people view those things as the hand of god, or of fate – that is, they view it in the context of something that’s directed in some way. I don’t really go in for that, as a rule. I note that the card is called the Wheel of Fortune, not Fate. I believe pretty strongly that we all face challenges in the world and our circumstances, not because of some divine structure but because stuff happens. Some of that stuff is good, some is decidedly not good…but most of it simply falls in between. Most stuff exists in a sort of quantum state that both sucks and is awesome – our observation of that stuff, and what we do with that stuff, has some impact on it, of course, but in my experience most “stuff” has impacts that aren’t so easily categorized until much later.

That said…stuff happens, and none of us can be fully prepared for it. But the point of the card seems to be that just because I’m not completely prepared doesn’t mean that I’m helpless. I have tools – the sword that the sphinx holds can be seen as that sharp edge of discernment that I can use to cut away what doesn’t serve me (or some of it, anyway). Apparently there are flying bulls with books I can borrow, too. I have knowledge, and stories, and symbols, and from time to time I have the sense to make use of all of these things to deal with what’s happening around me. The world is rich in tools and lessons, if I but have the wit to realize that what is going on now is not what will be going on then.

Not a bad ally to have in a year that promises to include a whole lot of change, now that I think about it.

In defense of consumption