One of my favorite things is to find a piece of wisdom in the last place I would have expected. There’s a sense of delight there that just feels good to me. A great example comes from the movie Men in Black, when Tommy Lee Jones’ character shares this:

See what I mean? It’s one thing to find some insight in, say, Zen and the Art of Motorcycle Maintenance, but to find it in a random science fiction movie? That’s way more fun. In any case, it’s something like this idea of unlooked-for wisdom that prompted my latest Tarot draw.

Question: What card has an unexpected gift for me today? 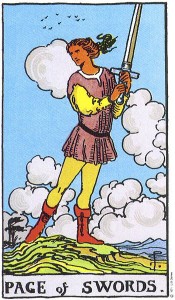 About the card: The card is pretty simple. In the foreground, we have a young man holding the aforementioned big damn sword. He’s standing atop a small hill, and in the background we see the ocean, a beach, a cloudy sky with a few birds and a couple of palm trees. The page is holding the sword back over his left shoulder. Looking at the trees, the large swells in the ocean and the page’s hair, it’s clear that it’s very windy in this scene. Given that swords are associated with Air, that certainly makes sense.

The story without words: Given the way the page is holding his body (turned to the side, with one foot extended and his weight held back), what I’m seeing here is that he is practicing forms. His attention seems very focused on whatever is before him, but he’s not precisely in a fighting stance. While it’s obviously a windy day, it looks like a very pretty one – the sky is what I call a “Ferris Bueller shade of blue” and the page is dressed in a way that suggests that the temperature is very comfortable. It’s possible, I should note, that I’m noticing this in particular because it’s late January in Chicago, and blue skies and warm temperatures are both in short supply. 🙂

But what does it mean?: One of the things I’ve heard about the Pages is that they’re the apprentices of the various suits/elements. It’s not about being a champion of the element, as in the case of the Knight, or of external or internal mastery of it (in the cases of the King and Queen, respectively). It’s about dedication, to learning, and perhaps even to surrender to that symbol or element, and to what that means to you.

I find that read particularly interesting with this card, because if the sword symbolizes air, then I generally don’t consider myself an apprentice thereof. Intellect, clarity of thought, discernment in communication…these are natural gifts I possess, and also tools I have spent a good deal of time honing. This is not to say that I wield those tools perfectly, by any means – far from it. But at the end of the day, this is the element, and these are the tools, that I am most generally comfortable with. One thing I am not comfortable with, though, is the idea of being an apprentice at anything. I love learning, but on my own terms, thanks. I do like trying new things, but generally in controlled environments where I get to set the parameters (and can ensure that nobody is around to witness my inevitable stumbles). An apprentice doesn’t have the luxury of dictating the terms or parameters of his or her learning, and an apprentice very often has an audience – all the better to learn, of course. This does beg an obvious question.

A number of possibilities come to mind, but the one that stands out right now is this: I admit that in the grand scheme of things, I don’t know as much as I like to imagine I do, and recognize that even in this area of strength I have much to learn. I look for opportunities to throw out what I already know. In short, I ask, “What if?” a lot…and then find out.

Looking at the question for this draw, then…what’s the unexpected gift that the Page of Swords offers? I think it’s the opportunity (which I mean in both the “sweet!” and the “Oh, shit!” connotations) to explore the tools I’m familiar with, an orientation to the world that I generally find comfortable, but to do so in a way that takes an intentional step back. Not just to question my actions after the fact, but to try something new, or try something I already “know” I can’t do, and learn what lessons I can from the experience.

(One other note that doesn’t quite fit with the above…for comparison, I pulled out the other Pages a few minutes ago, and saw something interesting. The Pages of Cups, Wands and Pentacles are all facing the symbol that they are apprenticed to. The Page of Cups, in particular, makes me chuckle because my immediate impression is, “I have a CUP! Whoa, look at that CUP!!” The Page of Swords, though, is already wielding his sword (not with a particularly effective-looking grip, it must be said, but that’s neither here nor there). He isn’t quite in motion yet, but there is motion all around him. He looks to me like he is preparing to move, while the other Pages are not.)