I realized rather to my surprise today that it’s just 4 weeks until the Spring Equinox. In a winter that has felt very much like it’s just getting started for…well, pretty much the entire season, this seems almost impossible. Much like the weather, I’ve soft of felt like I’m just getting ready to start something for most of the winter. That’s no bad thing, but I’m feeling a need to do whatever the next thing is. Rather than angst over the fact that 2012 is already seven weeks old, I decided that today I would ask about this last phase of winter and see what the cards had to tell me.

Question: What card will be my ally in this last month of winter? 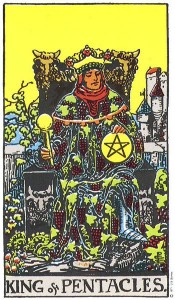 First impressions: Well, this is interesting. If I think about Winter as a time of work beneath the surface, I expect the fruits of that work to remain hidden for some time. The imagery on this card, though, smacks of work completed and goals attained – the fruits of a well-laid foundation, in other words, not the foundation itself.

About the card: The King is sitting on a black throne that is decorated with images of bulls. He is holding his symbols of office and is surrounded by well-laden grapevines. In the foreground we see a few flowers, and there is a large castle in the background of the image. The King is looking down and to his left, and under his cloak we can see that he’s armored.

The story without words: The King looks well-satisfied with his lot, and why shouldn’t he be? His kingdom feels like a place of plenty and comfort, at least based on this snapshot. The combination of natural beauty (in the form of the flowers and grapevines) along with that which has been crafted (the castle and his throne) seems to flow well together, and in fact kind of comes together in his crown, which is decorated with three red flowers. In short, it looks like his realm is well-designed, well-constructed and well-maintained. I suspect that a lot of thought and planning went into each phase of the construction and maintenance of this kingdom. I also get the idea that what the King has achieved has had more to do with the day-to-day work he’s set out for himself rather than random moments of insight. I don’t get a sense of, “Eureka!” from this card. It’s more like, “Chop wood, carry water.”

Kind of a side note…the imagery of this card seems incredibly masculine to me. Masculinity and femininity don’t usually speak to me very strongly from visual artwork, but it’s honestly just about the first thing that came to mind when I turned the card over, so I suspect there’s something there. It might be as simple as the darkness and squared-off construction of the throne, or I might just be projecting from the fact that the card is, you know, a King. I dunno.

But what does it mean?: Generally, this card feels like some pretty traditional forms of success have been achieved. The image is full of images of food, shelter and plenty. It seems clear that the King has achieved what he set out to do, and it also seems clear that he has both worked for it and is prepared to work more. The fact that we can see the armor beneath his cloak seems important. I just looked at the other Kings, and noticed that the King of Pentacles is the only one in this deck that is obviously armored.

So what does that mean? To me, it suggests that while the King has achieved a great deal of success and mastery, he hasn’t forgotten about the work he did that led to that success. It seems to me like he’s ready to ditch the pretty cloak and get back to work the moment it’s necessary.

Ultimately, I’m taking two things away from this card – that success is possible, and that it takes work (even work that I feel like I’ve already “mastered”). I’m still unemployed, and frustrated by that fact, but hey – the days are getting longer, and soon enough it will be Spring. Having an ally to remind me of the importance of the work that’s brought me to whatever success I have enjoyed to this point is a pretty good idea, I think.