Another day, another t-shirt

It’s Day 2 of T-shirt week. Thus far I’ve celebrated by discovering that after 2 ½ months and five interviews, I didn’t get a job that seemed rather promising. Awesome. Ah well, let’s get to it, shall we? 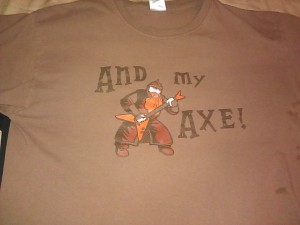 What it is: Well, that’s a bearded dwarf (as if there’s any other kind) playing an electric guitar. Obviously. Just as obviously (to a certain sort of person), the dwarf in question is Gimli. It must be Gimli, son of Gloin, because “And my axe!” is a line from Tolkien’s Lord of the Rings. As some relatively small percentage of the population at large (but a much larger percentage of my friends) knows, when Frodo Baggins declares that he will take the One Ring to Mount Doom and will destroy it by throwing it into the fires of Mount Doom, he is met at first with some disbelief. But then several of the story’s other heroes step up, and we have the following exchange:

Aragorn: If by my life or death I can protect you, I will. You have my sword:

Legolas: And you have my bow.

Gimli: And my axe!

So, um…there you have it. It’s a reference to a three word line from the first fifth of an epic fantasy story. It’s also one of my favorite shirts, as implied by the (thankfully small) stain from what I assure you was some kind of very healthy food. Some kale, or something, I suspect. It definitely was not potato chip grease.

Why it’s awesome: Okay, so we have a number of things going on here. Let’s see…

Anyway. Tune in tomorrow for another thrilling installment. Since these are running a day behind, I can give you a little hint…tomorrow’s t-shirt is black. You certainly won’t want to miss that amazing development.

I'm the one with the black t-shirt. You can't miss me.

4 thoughts on “Another day, another t-shirt”