Catching up on very important matters

Well, crap. The exciting 4th day of t-shirt week came and went without a post. Literally tens of readers were, I’m sure, terribly disappointed by this fact. I’d like to say that I have a good reason for it, but…well, it was kind of pretty outside, and I had some work to do, and…yeah. I somehow just didn’t get to it.

But fear not! I’m back on the horse, as it were, and more silly shirts are coming your way, starting with this one: 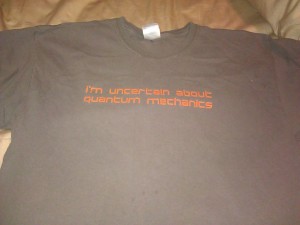 I purchased this gem from Thinkgeek a couple of years ago, and have worn the heck out of it since then. It is, obviously, a reference to Heisenberg’s uncertainty principle and its place in quantum mechanics…and given that I have a BA in Philosophy and no formal education in anything approaching quantum theory, that’s about all I can say about it.

What I can say more about, though, is the idea of no-context references. This is the sort of thing that I probably take more pleasure in than I should – hardly my greatest failing, it should be noted, but a failing nonetheless. Really, this shirt (like several others I own) are essentially comprised of the punchline to a joke that you’re not going to ‘get’ without already having some context. By avoiding that context, of course, the potential audience that will enjoy the reference is decreased significantly, while the potential audience that will say, “What the hell is that weird man wearing?” is increased by a commensurate amount.

There are two possible motivations for doing this sort of thing, I think. The first is to say to the general public, “You and I are different.” That’s obvious enough, right? I’m making a reference that you not only probably won’t catch, but that you’re probably not intended to catch. This is entertaining enough, and something that I’m happy to engage in from time to time, but it is also (by its very nature) an exclusive act rather than an inclusive one.

The other possible motivation, though, is a little different. Rather than saying, “You and I are different,” it can be to suggest, “If you and I are enough alike that you catch this reference, you should say hi.” In a sense, it’s a passive offer to connect with the world – or at least the relatively small part of it that one is really looking to connect with. It’s not a bold effort, of course – a bold effort would require taking a risk and seeking out fellow nerds in a more active way. Being a relative introvert and relatively shy to boot, that’s fairly unlikely for me. Even so, I think the difference between the above motivation and this one is important. An intention to be more inclusive (even selectively inclusive) is a positive thing, I think.

Even if sometimes it takes me by surprise. I remember a visit to the Farmer’s Market last summer when an older gentleman was standing next to me, looked me in the eye and said quite seriously, “So am I,” and then walked on down the block. I just blinked at his retreating form for a minute or so, wondering what the hell he was talking about…and then I remembered what shirt I was wearing. I swear, I wanted to go catch the guy and give him a high-five. Or at least a significant nod and a smile.