Now, I know what you’re thinking when I continue to call this a “Week.” You’re thinking, “You keep using that word. I do not think it means what you think it means. Well, that shows what you know. By “T-Shirt Week,” of course, I really mean, “A week’s worth of t-shirts, which may or may not be posted over the course of a single calendar week.” I mean, obviously that’s what I mean.

So, now that the definitions are cleared up, let’s get to it, shall we? 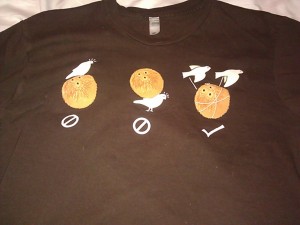 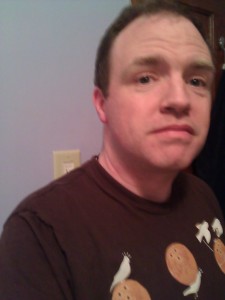 This fine shirt came from http://shirt.woot.com, home to some of my favorite nerdy things. Like many of my favorite shirts, it offers exactly no context for the joke, thus requiring the observer to either get the joke on their own or to be confused by the strange man or woman wearing the shirt. It’s a reference to Monty Python and The Holy Grail, which features King Arthur “riding a horse” throughout all of Europe, seeking knights to join his quest for the Holy Grail. Of course, he’s not actually riding a horse. He’s simply pretending to ride a horse while his faithful servant, Patsy, jogs behind him banging two empty halves of coconuts together to approximate the sound of a horse’s hooves on the road.

Eventually, Arthur is engaged in conversation about this bizarreness, and enters into a conversation as to how he found the coconut in the first place. Among other things, this raises the question of just how a swallow might carry a coconut on its migratory path back to England. It is one of the funniest bits in the movie, and is well worth investing 3 minutes of your time to check it out here.

One of those great random connection moments occurred while I was wearing this shirt last year. I was coming home from a road trip and stopped in a very small town in Indiana for gas. This is no the sort of place where my particular brand of…er, where my particular brand of being generally plays well. As such, I was completely unprepared when the cashier at the gas station looked me over carefully and then said, “Is that a Woot shirt?”

I just sort of blinked at him and paused before saying, “Yeah, it’s one of my favorites.” He mentioned that he didn’t actually know the reference, so we chatted for a bit about Monty Python. The cashier told me about a couple of his favorites from the site. We determined that our brands of geekdom didn’t really overlap, then I paid for my Cheetos and got back on the road.

The total time of that exchange was maybe ninety seconds, but it put a smile on my face for the rest of the day – and obviously I remember it well close to a year later. A number of people have commented on this shirt upon seeing it for the first time, but that particular encounter stands out just because of the unexpectedness of it. I really enjoy getting a reminder to be open to pleasant surprises from time to time, if only because it helps me avoid the sheer tunnel vision of the known and the expected.

So thanks, random guy working at the gas station in Indiana. May you be approached by someone who appreciates your geeky t-shirt when you least expect it.

Catching up on very important matters