byJason May 26, 2012 Ill-Advised Self Portraits

Another t-shirt post after approximately one zillion years? The hell you say!

So I have to admit, I’m pretty excited about this one – it is, without question, my favorite nerdy t-shirt (and as has been demonstrated over the past several posts, it’s not like I have a shortage of them to choose from). Let’s take a look. 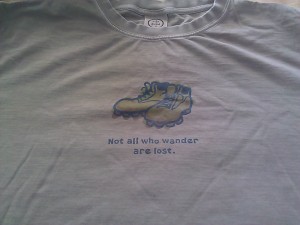 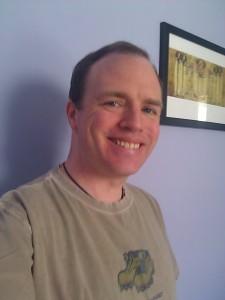 What it is: Those of a certain nerdy bent will note that this shirt is a Tolkien reference. Those of a somewhat nerdier bent will note that it’s actually not quite an exact quote, since the line in question is properly, “Not all those who wander are lost.” I actually quite like the rhythm of the words on the t-shirt, but being something of a Tolkien nerd I am contractually obligated to wish that the line was quoted correctly on the shirt.

In any case, this is part of a short poem from The Lord of the Rings. Here’s the poem in full:

All that is gold does not glitter,
Not all those who wander are lost;
The old that is strong does not wither,
Deep roots are not reached by the frost.
From the ashes a fire shall be woken,
A light from the shadows shall spring;
Renewed shall be blade that was broken,
The crownless again shall be king.

Why it’s awesome: Let me just pause for a moment and note that the first line of this poem is actually one of my favorite parts of the whole book. It’s a rearrangement of that old saying, “Not all that glitters is gold,” and it has a similar meaning – that we would be well-served to look past the surface before deciding what we’re looking at. There’s something about the phrasing here that…I don’t know. There’s optimism, a sense of possibility that I find a little inspiring. I’m sure the context adds to it – the poem is about Aragorn, a Ranger of the North who happens to be the true heir to the empty throne of Gondor. Upon looking at him for the first time, one would likely be as dismissive as Sam, who argues that anyone so scruffy as Strider (as he is known then) can’t rightly be trusted. Strider doesn’t look like gold, but he is, if one has the wit and the faith to look beneath the surface. There’s something about that idea that I find rather beautiful.

But let’s move on to the second line. Not all those who wander are lost. This reminds me of Thoreau’s contention, “If a man does not keep pace with his companions, perhaps it is because he hears a different drummer.” As I think about it, though, I don’t see these messages as being quite the same. The quote from Thoreau suggests to me that the person not keeping pace is simply following a different plan – a different rhythm, as it were – that she or he hears. The implication (to me, at least) is that what appears to be aimless wandering probably isn’t, and that I should get over myself (the next line, indeed, is, “Let him step to the music which he hears, however measured or far away.”). Slightly differently, Tolkien doesn’t seem to suggest that I’m misunderstanding the “wanderer”, but that truly wandering is no bad thing. This is a very small distinction, of course, but as a nerd I believe that making small distinctions is my birthright.

In other news…yes, I just spent a paragraph nattering about one of my t-shirts and how its six-word message is similar and dissimilar to line from Walden. There is, perhaps, something wrong with me.

Until recently, I’ve never seriously considered getting a tattoo. Or, rather, I’ve kind of wanted to get one in the abstract, but not until I had a clear idea of what I would get. About three months ago, I woke up from a dream where I had that Tolkien quote tattooed on the inside of my left forearm. I remember that it was there so I could see the words when I needed to be reminded of them, but also so it would take a token effort (turning my forearm over) to do so. Why that was particularly important, I don’t know, but in the dream it definitely was. And it was a vivid dream, too – when I woke up, I was really surprised not to see the ink there. I’m not sure when I’ll actually follow through with getting the tattoo, but I plan to do so in the next few months if it still feels like a good idea then.