A few words about space, stuff and intention

It’s safe to say that the last few months have been rough ones for me. Emotional, interpersonal and financial stresses have been weighing on me, ranging from the pretty much usual frustrations about work and my minor role in contributing to the evils of the world (working for one of the largest banks in the world is not, as it happens, my dream job) to exceptionally unpleasant feelings of helplessness around my family, my home and the people I care about most. November and December, in particular, included several conversations similar to this:

Concerned friend: “Jason, how are things going for you these days?”

Jason: “Well, my life is just as shitty as they were last week, and since last week it was as shitty as I can remember my life ever being, I’d guess I’d say that I’m not doing so good.”

So, you know. Good times for everyone around me.

The biggest frustration, really, has been an acute lack of optimism. I’m not a rabid glass-is-half-full sort of guy, to be sure, but I’ve really tried to cultivate a sense of hopefulness in my life over the past 5 or 6 years, and mostly I’ve been successful at that. Lately, though, that well has been pretty dry. It’s become pretty obvious that I need to break some of my unhealthy patterns and lay some better ones in my life.

A few weeks back, I decided to try jumpstarting this process by shaking up my physical space. There has been some reorganization of space around the homestead, and as a result there was an empty bedroom down the hall from mine. Tempting as it was to just shove all of my crap in there and sort it out later (a strategy that I employed when we bought the place in 2010), I wanted to make this move – if you can rightly call it a “move” when it’s down the hall – a more intentional process than that. Also, it had been a long time since I painted anything around here and I clearly needed a reminder of how much I hate painting.

Over the course of about 3 weeks, I primed and painted the room, shopped for (and finally bought) some lamps and shelving and went through everything in the old room and asked myself whether it was necessary or added something of emotional value to my space. It was interesting to note which of my possessions made the cut based on those criteria and which didn’t. Most of my books, of course, did, though I put about 30 into a donation pile. All of my clothes that I hadn’t worn in more than a year, with the exception of one of a suit that I just haven’t had cause to wear lately, went away.

Of course, the spare hard drive and the spindle of DVD-ROMs that I haven’t touched in about forever? Those somehow went into the general tech bin despite serving no immediate purpose. Apparently they fall into the “Emotional value” category, since I have no real justification for calling them necessary.

Once that process was done, actually moving into the new room was pretty simple. I did the majority of the work myself, though I had some help getting the bed moved in and put together, and some advice as to where to put the shelf for my altar and exactly where to hang lamps and such. It was actually rather instructive to do so much of the physical labor myself – I found that I really appreciated the assistance I received for those few things where I asked for it. Also, as an intentional act, it carried a little more weight, knowing that most of what I now see around me was my own doing.

I still have a few more things to figure out. I’m waiting on a couple more frames so I can finish hanging some art on the walls, for instance, and I need a better storage solution beside the bed. I’m really happy with the outcome so far, though. It feels nice to know that what’s in this room is only what I actively want to have in here. It also helps that in the past week, I’ve had 2 of the best nights of sleep that I can remember having in a very long time.

One of the great luxuries we have in our home is that each of us has a space that’s completely our own domain. Not our own in the, “Everyone keep out at all times” sense, but in the, “This is my space and I’m happy to have you share it with me for a while” sense. This year, I’m hoping to both remember and take advantage of that abundance and luxury, and to maintain the sense of intention and choice I worked on when moving in.

A couple of folks have asked for pictures, so I’m attaching them here. Please try not to cringe too much at the many flaws in the painting job you may see. 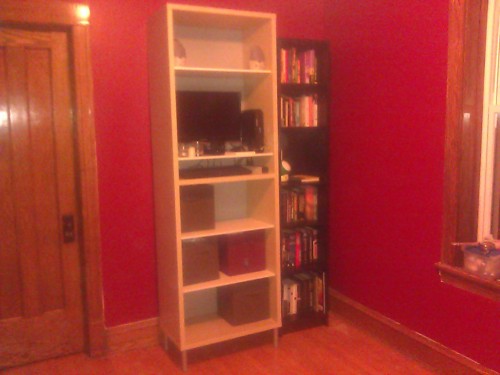 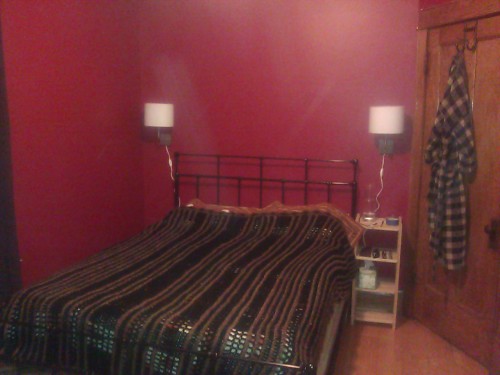 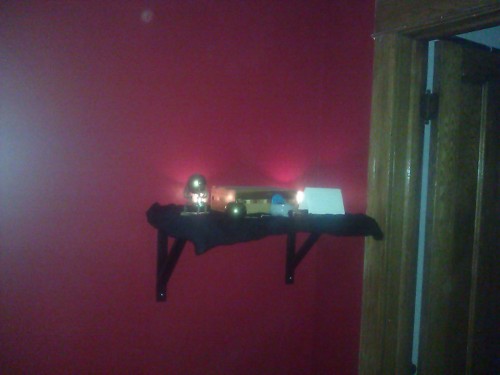 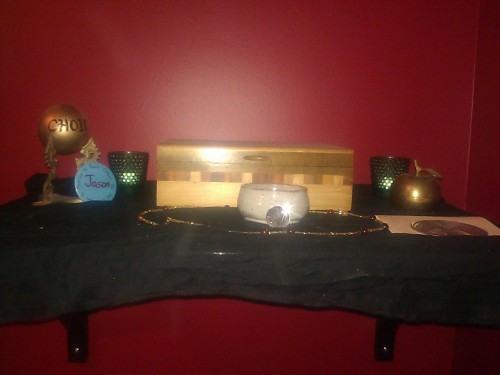 2 thoughts on “A few words about space, stuff and intention”