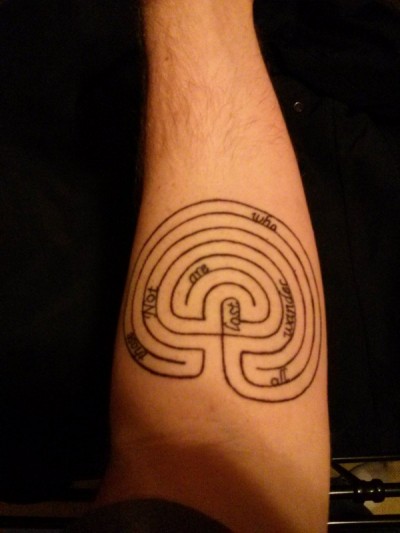 It started, as such things sometimes do, with a dream. In fact, I think I briefly referenced the dream on the blog sometime last year…yes! I did, appropriately enough in this t-shirt post.

The dream, which took place early in 2012, was simple enough – I had Tolkien’s quote, “Not all those who wander are lost” tattooed on the inside of my left forearm. I remember it being there, specifically, because I wanted to be able to look at the words when I needed a reminder of them. The dream was vivid enough that I was actually surprised when I woke up and discovered that I did not, in fact, have that tattoo. As the only person in my home without ink, and someone who doesn’t typically have dreams like that, it was a surprising experience.

This quote has always been special to me, because it serves as an important reminder that I don’t really know anyone else’s story, no matter how close we are or how insightful I imagine myself to be. It’s a good tool to give myself a nudge to practice compassion for the people around me. Even so, I spent quite a while feeling like the quote wasn’t the whole thing here.

Fast forward almost 16 months. Just before the retreat I took in June, I was reflecting on the image of a labyrinth, thinking about cycles and the frustration that I often feel when I realize that I don’t know where the hell I’m headed. This is, I should note, not surprising material given what’s been going on this year. It occurred to me, finally, that that labyrinth is, for me, a more self-reflective version of the Tolkien quote. It reminds me that my path is never going to be a straight line and perhaps I ought to practice compassion for myself, too, if I feel or appear to be lost. At last! The labyrinth image and the quote needed to go together…somehow. I was resolved to figure out the details and get it done before my birthday.

Being the person I am, I promptly filed that resolution away and didn’t do anything about it until about a month after my birthday. Then I finally reached out to Bek, an extraordinary tattoo artist near Chicago, and said, “Um, I’ve got this idea, but I’m not sure exactly how it goes together. Maybe something with the quote running along the outer edge of the labyrinth? Any other ideas?”

We went back and forth a few times, with several almost-right sketches being sent over. Finally, though, I remembered that what I love most about the labyrinth image is that the path isn’t straight. If you measure the space between the entrance and the center, it’s so short as to be almost negligible. But if you measure the steps it takes to get there, it’s suddenly much, much longer. Wouldn’t it be nice to have a reminder, from time to time, that I’m headed in the right direction even if the way ahead is unclear?

Ah-ha. When do I need the reminder that Tolkien’s words provide me? Not before I enter, but while I’m in the midst of the journey. I need to hear them as I walk, when I feel the most lost and uncertain of my path. In other words, I need to stumble across that message right in the middle of the freaking path, or I won’t notice it at all.

Once that was settled, it was just a matter of making sure the words were spread out enough to not run the risk of interfering with each other. After a handful of minor revisions, we had the final version. I just got it done on Sunday, and removed the high-tech bandage a few hours ago, after the requisite 3 days. I really couldn’t be happier with the way it looks, and I’m excited as hell to have finally gotten it done.

(By the way, if you’re local to Chicago or close to it, I can’t recommend Bek’s work enough. Look her up at www.tattooheathen.com if you’re so inclined.)

Inigo Montoya would not agree