Back in June I spent several days at Christ in the Wilderness, a retreat center in western Illinois, spending an intentional period of quiet and solitary self-reflection. As far as I know, there were three people on the land – me, one other retreatant, and the part-time caretaker who was filling in for the nun who is otherwise there, and was away for meetings of some kind. I stayed in a hermitage named after Paul of Tarsus, which included a twin bed, one chair, a small but functional kitchen, and a bathroom, all in a very open floorplan that reminded me of the first apartment I lived in by myself, if you removed the bedroom from that apartment and put the bed in the living area.

As for the land itself, there are several miles of paths through the extremely hilly woods and around the two large elevated meadows. I started keeping track of the chairs, tables and benches throughout the paths, but gave up after I reached twenty. There is also a screened in gazebo, a lovely small chapel, and a building called the Granary that reminds me of the chicken coop where I grew up (sans chickens, but with the same old wood smell and the same rather frightening number of wasps). In the hermitage and the Granary, I found several notebooks filled with words shared by previous visitors, and at the main house there is an extensive library of CDs, tapes and books in the library, most (naturally) of a spiritual bent. It is, very clearly, a space dedicated to the idea of solitude and contemplation. I could see immediately why it was recommended to me. The place is absolutely stunning.

My experience was, in a word, excrutiating, and I mean that in the best possible way. It was necessary the way setting a broken bone is necessary, but that in no way makes it a pleasant experience.

Other than my own thoughts, my most constant companion was music. I brought a number chant recordings on my phone, and listened to them a lot during the drive, in the hermitage and while walking the land. I was familiar with most of them already, having been present at events where they had been written (or at least where they were used for rituals). One that was new to me is called “Who Did I Say I Would Be?” Give it a quick listen, if you’re so inclined.

I found myself fascinated by the two alternating questions – “Who did I say I would be?” and “Who am I?” during one of my long walks, and when I got back to the hermitage I drew a card for each of them. 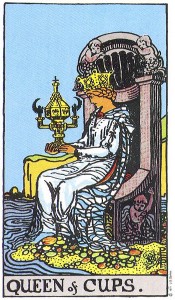 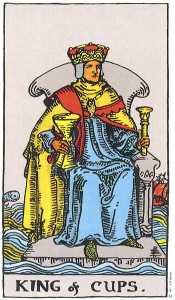 So, you know. That happened.

Since this is a different sort of draw, I thought I’d look at the cards together and compare and contrast them.

First, how are the cards similar?

Well, all of that makes sense. The differences between the cards, though, are really interesting.

So, what does it mean?

Comparing these cards is really interesting. People who know about such things have told me in the past that the Queens are about internal mastery of their suit, while the Kings are about outward mastery. The inward/outward focus feels really apparent in these cards. It looks to me like the King uses the water. He’s floating on it, and he holds his symbols (including the cup) in a way that indicates action somehow. The Queen, conversely, is of the water. The water flows over her, even though she’s on the beach. It looks like it’s washing over her and through her in a way that isn’t true for the King.

Something I hadn’t thought of before…this shifting focus thing seems to be true with the Page and Knight cards, as well. When I look at a Page I find that my eye is drawn to the symbol – the big damn cup, or sword, or whatever. The Knights are more action-oriented. Looking at the Queen and King, my sense is that the Queen is dedicated to the cup and the water that it represents, and the King intends to use it to accomplish his goals.

It seems like these two cards, in combination, suggest that I am oriented to see how my gifts may be of use, perhaps to the detriment of truly dedicating myself to those gifts. That’s not all bad, I don’t think. While I could say that the King’s orientation could turn the Water (or anything else) to his own ends, it could also be that he turns the gift to the ends of the people he serves. To his family, his community, his people. But while that is certainly a noble aim, I think it’s also one that might bring about a more surface-level relationship with that gift. The image of the King seems to say, “I know how to use this tool to do my work.” The Queen, I think, is all about depth and dedication. In this image, she’s entirely focused the cup she holds. If I want a model for using my gifts in service to others, the King looks like a good mentor. But if I want to dedicate myself and be in service to my gifts, then I think the Queen is the model that I should be drawn to.