Now that the remodeling is done at home, I’ve been feeling more time and space to relax and breathe. In addition to wandering around the apartment and saying, “Look! There are multiple rooms available to me!” I have started doing a weekly tarot draw on the weekends – just a single card, asking which ally I might work with in the week ahead.  I might not share all of those here, but it’s been a nice little practice for me so far, and I find that being more public about what I’m doing helps me continue to do it. This just started a few weeks ago, so it’s just a matter of making a few catch-up posts here.

As I’ve noted before, I am nothing like a Tarot expert, and my knowledge of what any given card REALLY means is accidental at best. My interpretation of these draws, such as it is, is very much through the lens of the lens of the ally I’m seeking.

So. Disclaimers aside, here we go.

Ally Draw #1: An ally for peace
Card: Queen of Cups 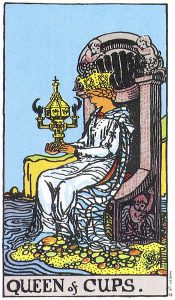 I am so fortunate in my life that when I talk about a time that isn’t peaceful, I’m not talking about physical violence, or a lack of survival-level resources, or housing instability, or anything like that. In my privileged existence, peace – or the lack of it – is very much connected to my emotional state. I’ve had some stuff going on of late, and it’s good to note that “stuff” for me isn’t major, terrible upheaval. But I’ve still felt disquieted, like there’s something on the horizon that’s concerning.

So I’d like some more calm and interior peace, if you will. And if I’m going to ask for advice or help, who better than this queen to approach? She is sitting on her throne, but so close to the water that is her domain. Is the tide coming in, or going out? Either way, what it tells me is that the emotion is not something that she is divorced from, that she keeps separate. Rather, she welcomes it and its gifts. They bring riches to her, and yet she remains who she is.

The queen is not emotion, is not water herself, but instead she accepts it – takes in what is needed, fills her cup for when times will be dry, and allows it to flow away in its own time.

“Stop trying to control, to corral.
Instead: trust, and accept, and have faith.
Do not forget who YOU are. You are a being of love and connection. You must allow the water to soak down and feed your roots as well as quench your thirst.”

In defense of the edge