A different sort of Ally draw

Most of my tarot draws this year have been about finding an ally for myself for some period of time. Generally, that’s been for a week, but sometimes for a particular event, a conversation, or a longer period of time. I like this relationship with the card images because it makes me feel like I have another tool at my disposal, someone or something else in my corner. Even if that someone/something else is my own exceptionally limited interpretation of the cards, just asking for aid and reflecting on what I see is a powerful act.

Yesterday I did something different, and drew a card with the intention of learning about being an ally. I’m am a pretty privileged person, and what with us being four weeks away from swearing in a racist Cheeto-in-chief, it occurs to me that I would be well advised to turn more of my awareness and action outward.

Question: What do I need to know about being a better ally? 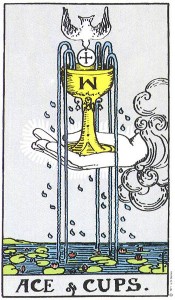 First Impressions: I think I’ve mentioned this before, but I like cards with people, which is why I use this deck. Basically, any time I draw a card without people I mutter something very professional and timeless under my breath like, “Stupid cards.” That said, I quite LIKE this card, and I had one of those, “Hey, this is cool!” moments when I first saw it.

About the card: So there’s this big cup, see? And it’s in the palm of a spectral hand that, I swear, looks like some of the animation from Monty Python. We also have a dove holding a host just above the cup (okay, fine, it’s a chalice). There are five funnels of water coming out of the chalice and into what I’ll call a lake or pond below. Also, some lily pads, which I’m sure mean something very insightful but that I will ignore as I don’t know what they might actually mean.

But what does it mean*? The placement of the hand feels important to me. It’s not gripping the chalice in a way that is exerting control. I grabbed a wine glass and tried holding it this way (I don’t have any chalices in my house, which I’m sure is another sign of my limitations in reading), and it was hard to carry it steadily without being very, very aware of my movements. Contrast this with, say, the Knight of this suit, who is holding the hell out of that cup. He clearly intends to use the cup – as a symbol, as a weapon, as something. Whatever his intention, I think it’s safe to say that that card is more about the knight, and less about the cup that he holds.

In the context of this question, I’m reading that as a reminder that to be an ally is, in part, to be clear and careful about one’s own movements and intention. To support, not to direct. To be present without co-opting the message or the action.

As usual, I’m sure there’s a lot here that I’m not noticing, but this feels like a good starting point both for the card and for my understanding of the question.

*Remember, this is through the lens of my question, not anything like an interpretation of the card’s intrinsic meaning.

A year of Justice? Sure, why not?

1 thought on “A different sort of Ally draw”