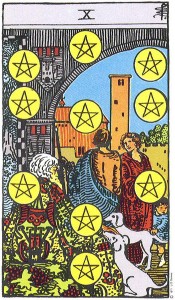 He was the sort of man who often said, “Being rich is almost as good as being King.” And he pulled together the trappings and symbols of that “almost” around him like the cloak he wore. Fine those symbols were, and well-made, without a doubt. He spent his life and his industry accumulating those trappings, curating them with great care and indeed he made it his life’s work to do so. What he failed to realize, as so many of us do, is that dedicating one’s life to the pursuit of “almost” is a powerful work of magic.

I will not tell you that we live in a world where everything is possible at all times, or that everyone has the freedom to accomplish anything they set their minds to. But what I will say, and what the man failed to consider, is that there is a sort of ceiling that comes into place when “almost” is a part of one’s daily spellwork.

And so what the man never quite learned is that devoting his life to the pursuit of “almost” is rather like polishing a piece of glass again and again and again, waiting for the moment that it transforms itself into a diamond. And of course it’s not that he believed that it would really happen, not deep down. Rather, after spending so much time on the activity, it felt very important to him that others believe (or at least behave as if) it were true. And so the old man hired a guard and gave strict instructions that he was not to be bothered in his very fine house – while carefully positioning himself to be seen by those who he made such a point of not admitting into his presence.

The dogs, naturally, were having none of it. They never do, do they?