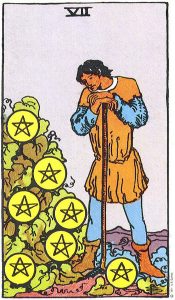 The thing about work is that most of us don’t really like it very much. Even those who do what they love, mostly they love having done the thing, not so much the act of doing it. And the harvester was no exception. After the tasks of planting the seeds, tending the plants, and pulling the weeds, beholding the fruits of those labors was lovely. But collecting them, well. It was hard work, and the harvester, like most people, didn’t like that very much.

So he settled on a trick, a little way of occupying the part of his mind that would otherwise be sighing and gnashing its imaginary teeth at the task ahead. And what he did was this:

He looked at the plant and worked out how many fruits had to be collected from it before starting. This time around, there were seven. Then he harvested the first one and thought, “Look, that’s 14% done already,” and then it didn’t seem quite as lousy. Then, of course, there were only six left, so the next one allowed him to think, “Look, I’m another 17% through,” (he always rounded up, you see. Good for morale.) and then 20% and 25, and before too long there were only two left and he could finish half the job at a single whack.

This trick had the added benefit of making him quite good at math, which was really useful later on when he helped to split up the pie that his friend made out of the fruit that he had harvested that day.