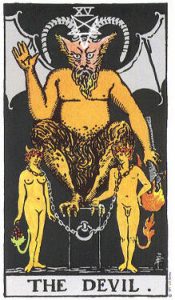 She paused before entering the central chamber. The journey here had been easier than she had anticipated – suspiciously so, she realized. It was almost certainly a trap, but she had no choice but to enter so she could rescue the captives inside. With a shout, she kicked the door open.

“Oh, thank goodness you came!” I was really beginning to worry that nobody would show up, it had been so long.”

The hero tilted her head to the side slightly, but didn’t lower her sword. “Ah…come again?” she asked.

“These two knuckleheads showed up weeks ago and I can’t get them to leave! Can you talk some sense into them, please? Maybe they’ll listen to one of their own.”

One of the captives spoke up. “We’re trapped here! Look at the chains!”

“That chain will slip right off your neck,” the devil snapped.

“It does look rather loose,” the hero said, feeling rather confused by the whole situation. “Have you tried slipping it off?”

“We didn’t dare!” wailed the other captive. “The devil would have set us on fire, look at that torch!”

Did devils sigh? Evidently so. “That’s just so we can see. You were upset about the darkness before, so I lit the torch. Remember?”

The hero began to feel just a little bit foolish brandishing her sword in the midst of this conversation, and she lowered it to a less threatening angle. “There’s still the matter of the letter that one of your foul minions brought to the village, threatening to kill these two in particularly gruesome ways.”

“Oh, you mean Carl? Well, look, I tried sending sending a couple of other messages explaining the situation more honestly and asking for help, but the villagers were certain that it was a trick. I didn’t know what to do then, to be honest, but Carl convinced me to do the gloating villain thing, and now here you are.”

The hero’s head was positively spinning now. “So what happens now?”

“Now?” the devil’s voice deepened, filling the chamber so that the walls seemed to vibrate with power, “Now you will collect these two and take them from this place. You will convince them to swear oaths never to return and IF THEY DO…”

The devil sighed again. “Can I just send Carl directly to you next time? I’d really prefer to skip the ‘threaten to dismember and consume the puny mortals’ approach next time.”

She nodded her agreement, thinking that the hero business was a very strange line of work indeed.