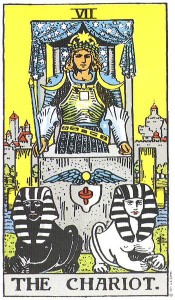 Once there was a ruler who, upon their coronation, was given a worrisome, impressive, and questionable gift. It was a glorious chariot (that was the impressive part) that was drawn by two sphinxes (that was the questionable part) who refused to allow the charioteer to use reins (that was the worrisome part). It took the ruler some time before they were willing to even consider using the chariot, but after some time they worked up the nerve to do so. They were the ruler, after all, and surely the sphinxes would understand that while they may be powerful magical creatures, they were also the subjects of the realm and therefore beholden to the ruler’s instructions.

As it happened, the sphinxes did not understand this, and found the whole business rather amusing. So the ruler, understandably, elected to wait a little longer before boarding the chariot.

One day, the ruler was pacing across the throne room. The chariot had been placed outside the palace, within view of the windows, and the ruler couldn’t help but feel a little foolish every time they looked out and saw that symbol of their failure out in plain view. Fortunately, there was an advisor who the ruler trusted very much, and they were eventually summoned to the throne room to discuss the situation.

“I’m frightened,” the ruler said, understandably. “I know I must ride the chariot eventually, and every day I don’t just makes it worse. But I can’t help but think of all of the things that could go wrong, being dragged through the countryside by a pair of sphinxes without any reins to control where they take me.”

The advisor nodded. “I won’t lie, that sounds damned scary to me. I wouldn’t do it for all the gold in your treasury.” This was not, the ruler pointed out, advice, strictly speaking, and the advisor was encouraged to try again.

“You could always make a run for it,” the advisor offered.

The advisor sighed. “Okay, look,” they said. “Is there anything else you can do to keep the sphinxes from taking you off a cliff or into a tree?”

The ruler shook their head emphatically. “I’ve tried everything! I ordered them, and I, um…well, do you think I could order them again, only louder this time?”

“Or, and bear with me, because this might be really out there…you could talk to them?”

The ruler had the good grace to look a little sheepish. “I suppose I could try that.”

“Honestly. You’ve been in charge for what, like a week, and you’ve already forgotten that you could do literally anything other than ordering them?” the advisor was, it must be said, a bit exasperated.

The ruler said, “Look, I’ve been under a lot of pressure! Okay, perfect. I’ll do that! I’ll just go talk to them, and then I guess we’ll see what happens.” With that, they headed out toward the chariot, determined to accept the gift, take the ride, and deal with the consequences, whatever they might be.

“Oh,” the advisor called out. “one more thing!”

The ruler looked back expectantly.

“You might want to wear your armor, too. Just in case they DO try to run you off a cliff or something.”

“That’s…a pretty good tip,” the ruler admitted, and headed off to follow this very sensible advice.