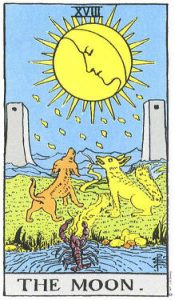 Once there was a hound who was very good. He had been taught many things since he was a pup, and one of the things was that the other hounds were his friends, but that foxes were not to be trusted. They were wily and wild, not like a good hound at all.

Once there was a fox who was raised well in the ways of foxes. She was clever and quick, and she too had been taught many things. Among them was that foxes were trustworthy and good, and that she should be very, very careful when it came to hounds.

Now, to understand what happened next we need to go way, way, way back. The foxes and the hounds had been at this for a very long time, and their suspicions and mistrust were well-known. Of all of the reasons they had for fighting and arguing and mistrusting one another, the biggest reason was the way they each behaved under the full moon. The hounds gathered together, threw their heads back and bayed long and loud. The foxes, on the other hand, came out on their own to dance and yip and roll on the ground under the full moon’s light. These differences may seem quite minor, but they were very, very important to both parties. At some point, though, the leaders of the hounds met with the leaders of the foxes and brought all of their wisdom to the gathering. They had fought and struggled and argued for as long as any of them could remember, but at this meeting they agreed to put a stop to all of that. They called to their friend the Sun to shine very brightly along one stretch of land and burn the grass there, making a line that ran from the mountain to the sea. The Sun did so gladly – it was summer then, and the Sun was very hot and rather liked burning things.

“It’s settled, then. You stay on your side, and we’ll stay on ours,” the wisest hounds growled at the wisest foxes.

“You stay on your side, and we’ll do the same,” yipped the wisest foxes to the wisest hounds. Both sides did so, and there was peace between them, though not very much trust.

And so years and years later, this particular hound and this particular fox were each exploring along the line the sun had burned so long ago. They chanced upon one another, and their hackles rose and their eyes narrowed and they each told the other one in no uncertain terms how lucky the other was for that line, because without it, well, who knew what might happen?

They were so focused on their eye-narrowing and hackle-raising and thinking up really good threats to snarl to one another that both of them were startled when a third voice chittered from behind them.

“You’re both being very silly, you know.”

“Well, no,” the hound replied. “I’ve never met her before in my life.”

“The scorpion shrugged with its pincers. “You both have sharp teeth and you both have clever ears and you both pay homage to the moon, and I can’t see why you’re so upset. Has one of you stolen the other’s dinner?”

“No!” replied the fox, clearly offended by the implication. “Didn’t you hear that we’ve never met?”

The hound and the fox looked at one another and then snorted in exasperation. Of all the stupid questions! “We don’t have to listen to you, you know,” said the hound.

“That’s right,” agreed the fox. “Look at you! You don’t even have a line in your sea to tell you which side to stay on! If you don’t have that, how can you possibly understand how to keep the peace?”

The scorpion did not sound angry or embarrassed by by its lack of knowledge. “I suppose I just go places,” it said, “and if I intrude where a fish or another scorpion doesn’t want me, I apologize and move on. And if we’re not sure of who ought to be in a particular place, we talk about it and come to some agreement.”

And then the hound laughed so very loudly, and the fox laughed even more loudly. Of all the silly notions! No line to help them keep track of what side to stay on, or to tell them who belonged on the other side! Just moving around and talking and not arguing at all? Maybe that would work in the sea, where the animals were rather silly and unsophisticated, but everyone knew that on land things were much more complicated and it was in their nature to squabble and fight and hurt one another if they didn’t have a line to honor.

Eventually they stopped laughing and turned back to explain all of this to the scorpion, but it had left!

“How rude!” sniffed the fox.

“How rude!” agreed the hound.

And with one more eye-narrowing and one more hackle-raising for good measure, they each turned away from the other and returned to their homes.