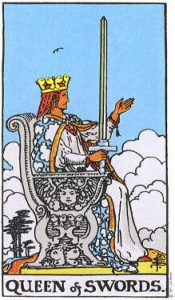 The Lady holds the sword for the worthy Hero. She bestows it upon him – nearly always him, it seems – demonstrating his worth as a warrior, a knight, a king. The sword, and her favor, are used to elevate his position and either set him upon the path of his destiny or show that he has reached its peak. The Lady is an initiator and an avatar in his story.

Sometimes the Lady keeps the sword, and bestows it upon no one. Sometimes the symbol of worth remains in her hand and at her side. Sometimes it is the Lady, and not the king or the knight or the servant boy who is set upon the path of destiny.

When that happens, sometimes the Lady becomes a wise ruler, or a cruel one, or a grand hero, or something else entirely. The point is that she becomes. She changes and grows and fails and succeeds. She is at the heart of her story, not at the periphery of another’s.

If you have trouble bringing one of her stories to mind (and you might), perhaps that is a sign that it’s time to go and write one of them, or to live one of them.

Her sword is as keen as her wit, as quick as her tongue, and as well-forged as her will. She suffers no foolishness, her own least of all, and her tale carries all the way through “The End.”