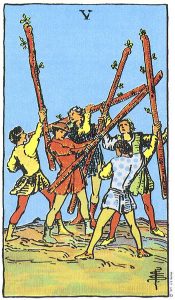 Once there were five children who were given large sticks and a topic to discuss. Before long, somehow, they left off discussing and began hitting one another with the sticks, and a couple of them were injured in the process.

After making sure everyone was receiving the care they needed, members of the village came together to discuss what had happened and what, if anything, they could do to stop it occurring in the future. (They agreed to leave their sticks at home during their meeting.)

It’s probably not surprising that tensions were high. Some of the children were hurt, after all, and everyone cared about keeping them safe. The meeting turned, perhaps inevitably, to the topic of large sticks.

Some people argued that sticks should be banned altogether, while others suggested that there should be a great deal of care given to deciding who could and couldn’t carry a stick. Others pointed out that if the sticks were smaller, fewer injuries would have resulted, and still others began designing shields for the children, so that they might be safer the next time around.

Another group was very upset by all of these suggestions, and felt that the sticks weren’t the problem at all. They had sticks of their own, and they also remembered fondly their time as children, learning to use them and playing with them. Since they had turned out just fine after years of having and using large sticks, how could the village even consider depriving today’s children of that same joy? Sticks, they pointed out, were after all only a tool.

Finally, another person stood to speak. I don’t know if they were a parent or not, but they cared about the village and the children very much. They said, “I don’t know. Maybe we should all get rid of our sticks, or agree to only have ones of a certain size. Maybe that really won’t help much, and maybe the sticks really are nothing but a tool anyway. These are really important points, and we should continue to talk about them and hash them out together. As for me, though, I can’t help wondering – why were large sticks the only tool we gave the children to settle their disagreements?”