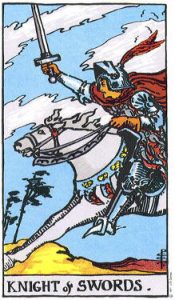 After all the study and practice and training and dedication, the battle was about to begin, and the knight had one more lesson still to learn. For them, it was the hardest of their many lessons, and seemed to run counter to the tactics and strategy that had been drilled into them by their teachers.

In that moment before the battle began, one of the first instructions the knight had been given came to mind with new clarity. It had come from an old soldier, long since retired, who had fought in many battles and wisely maneuvered around many others. The soldier had said this: “When that time comes – and if you find yourself asking, ‘Is this the time?’, it’s not – but when that time comes, all that’s left is to be the knight you first glimpsed in your dreams.”

The knight realized, with something like surprise, that the soldier was right. The time had arrived, and the purpose before them was so clear, so simple, and they felt something very much like joy.