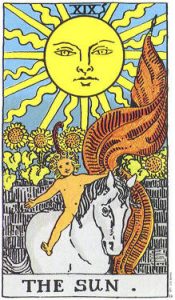 Once there was a human who died, and upon readying for their next turn at life, was asked what lesson they most wanted to learn. Now, this may or may not be a thing that happens to everyone, but at the moment of their death the human had just been thinking, “Next time around, I’ll do it better,” and perhaps that shaped what happened next. Regardless, they were granted the opportunity, and without thinking about it for too long, said, “Trust. I want to learn to trust.” And so they were reborn as the sun.

At first, this was strange and wonderful indeed. The sun! Powerful and visible and known by all. Worshiped by some (by most, really, whether they’d put it that way or not) and the center of lives, if not precisely the center of the universe. So the sun that was previously a person felt like they had gotten a very good deal indeed. What could be better than to be anticipated and praised and idolized by all the people of the world? The sun was quite pleased with this, and made a point of shining particularly pleasantly.

As time passed, however, the sun started to notice that the day was lasting a very long time, and wondered when it might be nighttime so they could have a rest. Not that they didn’t appreciate the attention and praise, of course, but at some point it might be nice to catch a breather.

“How long will this day last, anyway?” the sun finally asked, not expecting anyone to answer.

“The planet’s round,” a voice replied, taking the sun quite by surprise. “It’s never not daytime somewhere.” The sun looked around and found a horse nearby, standing rather placidly on nothing at all. The horse was unremarkable, and seemed unimpressed with the sun and its brilliance.

“Excuse me,” the sun said as politely as possible, “but what do you mean, it’s always daytime? When do the people sleep?”

The horse let out a soft little sigh, and explained to the sun what you already know about round planets and rotation and days and nights. The sun was suitably impressed, and looked a little closer at the planet (singeing the ground in some places as it did so) to see that yes, indeed, the people who were currently greeting it were not the same ones who had been doing so just a few moments (hours? days? months?) ago. This was very interesting, but eventually the sun, just like most of us, started thinking about what that meant for them, exactly.

“So, not to complain or anything,” the sun said in a way that suggested that they were leading up to a good complaint, “but I asked for a chance to learn about trust, and it looks like I’ve just been cursed to work forever without rest.”

The horse gave the sun a patient look, waiting for them to continue. Eventually the sun said, “But…I assume you’ll tell me I’m wrong about that? Please?”

“Why do you think you have to work all the time?” the horse asked.

“Because it’s always daytime somewhere, and the sun is what makes the daytime!” the sun said, “So I’m always on stage, if you will. It sounds exhausting.”

The horse furrowed its horsey brow. “Oh, now I see,” it murmured as if to itself, then trotted up to whisper to the sun, “There are wonders in the skies, you know, but you’ll have to turn away to see them.”

The sun gasped. Turn away? But then…it looked at the horse. “If I turn away, won’t the people below be plunged into darkness?” it said, not asking the question it was really wondering.

“I assure you,” the horse said, “that you shine in all directions. They’ll be fine.”

The sun hesitated, feeling very foolish, but finally managed to force the real question out. “If I turn away to see these wonders,” it said very quietly, “then I’m not sure I’ll still be here. It all seems so unreal, you know, being the sun, and I’ve been watching the people watch me. When they’re waving up a the sky and waving and pointing, I know that this is real. I know that I’m real.”

“And?” the horse prompted.

“And I’m scared,” the sun confessed, “that if I turn away I’ll discover that I’m not real.”

The horse nodded. “That is what you asked for, you know,” it pointed out reasonably.

“I did not! I asked to learn how to trust, not to learn how to be afraid!” the sun snapped, and far below a few people got an unexpected sunburn and a few others wrote sharp notes to their local weather forecasters.

The horse and the sun waited for a long time – one of them patiently, the other sullenly.

Finally, the sun said, “And…I suppose I can’t do that if I don’t ever do anything that I’m scared of.” The horse remained silent, but in a slightly more encouraging way.

The sun took a deep, deep breath and turned away from all it had known, to see the wonders the horse had promised.