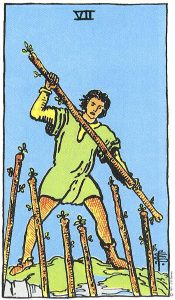 On the eve of his battle, a young soldier wandered the camp restlessly. The invaders were numerous, with more of them arriving by the minute (or so it seemed, at least) and even without having experienced it before, it was clear to the soldier that the fight would begin the following morning. He was frightened, which wasn’t unusual, in spite of the boasts that some made to the contrary. After some timeless period of drifting through the tents and campfires, the soldier came upon one of the veterans he had trained under for some time after volunteering, and after a moment of hesitation, joined the older fighter at the fire.

“Tomorrow,” she said by way of greeting, and the young soldier nodded.

Another nod, this time a bit abashed. The veteran chuckled. “Me, too. Always am, to be honest.”

Something about the easy confession opened up the young soldier’s voice, and thinking about the sea of invaders, he asked, “Is it as bad as it looks?”

The veteran shrugged. “Worse, I think. I saw the captain looking worried, and if the captain worries, well…” her voice trailed off.

The younger soldier laughed bitterly. “My first battle,” he said, “and I’m doomed to failure.”

The veteran looked genuinely confused. “What do you mean, failure?”

“We’re outnumbered, what, six to one?” the young soldier countered. “Maybe more? And the captain is worried, and there are more of them arriving every hour, and most of us are either old – no offense – or have never been in battle before.” His voice crept higher, but if the veteran was put off, she gave no sign. “How’s that a recipe for anything but failure?”

The old fighter sat back for a minute, then took a drink from her cup before answering. “That’s a recipe for defeat, my friend, sure enough. Thing is, everyone is defeated, at some point. Some many times, some – sorry to say – only once. But if you take your place, you do your part for something you believe in, well, failure isn’t the word I’d use.” Her voice trailed off, and she gazed into the fire with the look of someone reliving moments from long ago.  When she finally spoke again, her voice was much quieter and she smiled, ever so slightly. “No, that’s not a word that comes to mind at all.”

The young soldier sat quietly for a long time, finally noticing the first hint of light to the east, then stood and returned to his tent to prepare for the defeat ahead.

(with a hat tip to Lois McMaster Bujold)