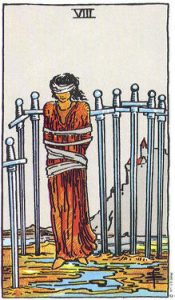 They were captured outside of their home, away from all they knew. Blindfolded and bound, they were surrounded by magic swords, each of which whispered different things to them. One sword told the captive that no one would come to help, another said that they were going to die alone out in this place, another whispered insistently that the captive wasn’t worth saving, anyway. The swords and their whispers were everywhere, or so it seemed, and since the captive was bound they couldn’t reach out to feel their way through the swords and since they were blindfolded they couldn’t look around for a safe path.

Alone there in the darkness and the whispers, the captive couldn’t help but hear the swords’ whispers, because they seemed to be the only sound nearby. Of course, then there was the problem that so far, no one had come to help, so in that at least the swords were telling the truth. And if that was true, then maybe the other whispers – that the captive would be alone forever, that they were unworthy – were also true. Do you see? The captive was surrounded by an enemy that they couldn’t see and couldn’t touch, and that no one else could hear.

But I said that this was a story about courage, and so it is. The captive happened to notice after a long time that there was some moisture on the ground at their feet, and they could feel it moving almost imperceptibly. They didn’t know whether it was water or blood, if it led to safety or to a bottomless swamp, but they felt it moving that tiny bit. So the captive reached out with one foot, felt around on the ground as much as they could, and – heedless of the swords unceasing whispers and their own fears, took a small, small step.

Now, a lot of things may have happened next. Truth be told, I don’t know what happened to the captive. But I know that that first step, and the decision to take it, was the bravest thing I ever saw.