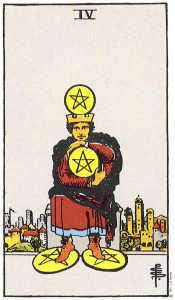 The thing you have to know straightaway is that there are different kinds of kings. There are the kings of the sort you probably think of – heads of state, living in grand castles and ruling over thousands and thousands of subjects. Then there are petty kings, whose domains are smaller, their rule focused on a much more insular area, and possessing a much less grand lifestyle. Some grand kings are petty, and some petty kings are wise, and if that seems at all confusing, well, I’m sure there’s a linguist someplace who we can blame for it.

Now, this petty king was not wise, but he was clever, and he also guarded over his power like a dragon standing sentry over its hoard. He was a jealous king, envious, and – may as well say it – petty. One day, the petty king was visited by a god who was trying on the shape of a fool. That’s the sort of thing that some gods do, taking the form of people or other creatures to see what mischief (or other entertainment) they can get away with on Earth. The god was doing a very nice job of it, too, and so far as I know, nobody had seen through the disguise. Until the king, that is.

So the petty king met with the fool god, and because the king was clever, he saw through the ruse immediately. He didn’t let on, because he sensed a way to turn this to his advantage.

“Be welcome in my home,” said the petty king, invoking the dance of hospitality in a way that itinerant fools (whether or not they are gods) rarely experienced. “Sit and dine and drink with me.” The fool god did so, gladly, and the petty king lavished his guest with the finest things. A bottle of wine apiece, with the oldest and rarest vintage given to the fool god. The grandest feast that the petty king’s home had ever known, just for the two of them, and the choicest dishes presented to the guest first. Gifts, too, of the sort that the king never gave anyone (he was much more interested in receiving gifts, was this king) and in truth the wine and the feast and the gifts were rather more than the king could afford to give. His lands wouldn’t quite be bankrupted by this largess, but it would be a near thing.

And yet this was a very clever thing to do, because the king knew his guest’s secret, and the king also knew that the traditions of hospitality dictated that all gifts must be returned in kind. Not an equal exchange of objective value – that would be pointless, and would result in the same gifts simply exchanging hands back and forth. No, tradition held that gifts must be of equal effort to the giver. This ensured that if a ruler gave their poorest subject, say, a mere trinket from the treasury, the subject’s responsibility was to repay that gift with a trinket of their own. Done properly, this sort of exchange could enrich those who had less, while avoiding the sense of debt or obligation that might otherwise follow.

Or, in a case like this, it could give a king the opportunity to outwit a deity under the guise of generosity. If the king gave the fool god almost everything he had, the the god was required to return the favor. Receiving a gift that took as much of a god’s effort in exchange seemed like a very, very good deal to the king.

And so, when the feast was done and the wine was drunk and the gifts were accepted, the king smiled his petty, clever smile and said, “Of course, as my guest, there is the small matter of the favor to be returned.” The fool made a show of turning out its nearly empty pockets, but the king shook his head and named the god and said, “Others may have been taken in by your disguise, but not me. Now, as your host I will take what I am owed.”

The god inclined their head, agreeing that the king had a right to the gift, and asked what the king required.

“Why, it’s quite simple,” the petty king replied, “I require from you all the riches that I can hold.”

The god (who was not a fool) asked if the king was sure, and the king (who was petty) said, “Oh yes, I am quite sure,” feeling very pleased with himself.

The god reached again into those nearly empty pockets then, and pulled out four very small coins, and tossed them onto the table. The king reached out quickly and clutched them in his hands, and said, “That’s a start, at least, but I can hold much more than that!”

And as he said this, the king noticed that the god was growing bigger. Much, much bigger, and the king – being true to his nature – held tightly to the coins that he had been given, because he had no intention of giving up what he had rightfully taken.

It was about this time that the king realized that it wasn’t just the god who was getting bigger, it was the coins, too, and the table, and the dining hall, and…everything! The king clutched even more tightly to the coins, and everything else got even bigger (at least to his eye – you know, of course, that it wasn’t that at all, but the king getting smaller). The king held as tightly as he was able, holding on for dear life now, so fixated on what he had in his hands that he couldn’t see the trap for what it was.

And the petty king sits there still, someplace, almost too small to see. Clinging to the coins that really are all he can hold, for he is unwilling to loosen his grip for an instant.

As for the fool god, well, they finished the last of the wine, ate the last crumbs of the feast, and went off in search of more mischief (and perhaps more honest hosts) out in the wide world.