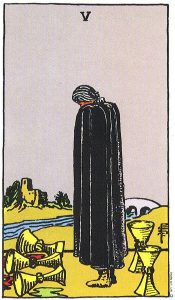 Once there was a person who had lost a lot of what they held dear, and they were in mourning for a long time. This was a while back, and so they wore black to show that they were grieving – it was a visual cue to others that this person had suffered a loss, and that they should perhaps be treated with a bit of extra care and kindness. This sort of thing would fall out of fashion in later years, but I wonder if that’s really a good development.

It’s an interesting thing, though. Even with that public, visible signal, there were those who tried to convince this person that things weren’t so bad after all, or at least that they still had a lot to be thankful for. “Yes, of course, you’ve lost a lot,” they would say, “but don’t forget – you have your health (or your family, or a job, or whatever the mourner’s friend found important in the world)!” That’s another interesting thing, isn’t it? When someone tells you what you ought to be thankful for when you’re sad about something else, what they’re really saying, oftentimes, is that they value that other thing more in their own life, and they’d rather you did the same.

The mourner, quite stubbornly in the opinion of those around them, continued to have the feelings they had, and did not respond in the way their friends might have preferred. It even got to the point that the mourner turned their back on the very things the friends said they should pay attention to, choosing instead to focus on what they had lost. Their friends were quite frustrated by this behavior, and whispered among themselves that it was very annoying that the mourner wouldn’t listen to them.

What the friends didn’t realize, though, is that the mourner had done something that was quite clever, and quite wise. They had listened to their heart, in their time of grief, and their heart had told them to sink into their sadness and turn away from those other joys for a time. To keep those joys safe and untouched, for a while, and feel what was before them. Their broken heart said that this was what they needed most, and while the mourner had heard their friends’ advice, they decided to listen to the part of them that needed to heal.

There is no one way or right way to grieve. One person who is very sad may need to embrace the other parts of their life that bring them joy, and that doesn’t mean that they love what has been lost any less. Others may need to do what this mourner did, and face their sadness intentionally for a while. That doesn’t mean that they aren’t aware of their other blessings. So when you find yourself faced with loss and sorrow – and you will – I hope you’ll be wise enough and brave enough to listen to your heart, and to heed its counsel.