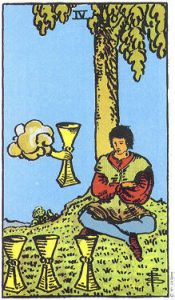 Once there was a magician who stubbornly refused to believe in magic. No matter what happened around them, the magician insisted that there was some other explanation – a strange coincidence, or a misunderstanding, or (most commonly) someone playing a trick on them. Because while the magician had powerful magic (though they wouldn’t admit it), they had an even more powerful fear of looking foolish. And so it was easier to believe that whatever was happening was the result of someone trying to pull a fast one. Even if they were wrong, at least they wouldn’t have been taken in by a trick.

This strategy served the magician very well. They never looked foolish, and so avoided their greatest fear. However, it also meant that they had to work increasingly hard to dismiss the things that happened around them. Strange changes to the weather, or animals that seemed to talk (albeit just for a few seconds – animals, as a rule don’t have a lot to say when humans are about), or the sense that there were delights awaiting the magician if only they would accept them.

You see, that’s the thing about magic. If it’s a part of you it doesn’t go away, it just gets more insistent. It tries to get your attention, to open up, to reach out for it. But you have to meet it partway. You have to risk being foolish enough to believe in impossible things.

The stubborn magician never did, I’m sorry to say. They redoubled their efforts to ignore the part of them that was incapable of such impossible power. In the end, I suppose, that was the one spell they ever worked – to create the illusion, in their mind, that their own magic didn’t exist at all.