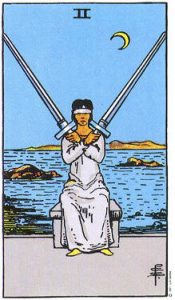 There is a land very far away from here that may be the wisest this storyteller has heard of. The people there live in a rich and fertile place, and worried for a long time that they would be the victims of theft or even invasion by those who wanted what they had. At the same time, they wanted to be generous, if they could. Finding that balance of living their values while remaining safe was perhaps the most important thing to them. So they prayed to their gods and worked their magics and used their own knowledge to determine how to best protect themselves, and they settled on this: They trained their finest warrior to act as a sentry, and using magic and prayer and knowledge imbued the sentry with such keen hearing that they could sense the greatest threat approaching the harbor. That way they would always know, if a ship approached, whether they would need to call out the rest of the militia or not.

The sentry was also blindfolded, because the people learned over time that even with that perfect hearing, it was too easy to be influenced by how people looked. If they were different, it was all too likely that they’d be deemed dangerous.

And so the sentry was granted these gifts, and given a simple charge: To face in the direction of the greatest threat to the land and its values. They had and were a balance of the gods and magic and human ability, and they were exceptional at this task. The people felt safe, knowing that the sentry would point out the greatest dangers to them, and they could respond as needed.

Now, all of this that I’ve described is very clever, because it ensured that the people who lived in this place would never be taken in or fooled by newcomers that were there to steal from them or harm them under the guise of friendship. This cleverness is very impressive, but more impressive was their wisdom.

The outcome to this particular bout of cleverness was this. The sentry put on the blindfold, carefully blocking their sight, took a deep centering breath, and slowly turned in a circle, allowing their perfect hearing to guide them to face the greatest threat. When they came to rest, their back was to the harbor and they were facing inward. And as each visitor came, either with offers of trade or pleas for aid, the sentry remained perfectly still. Facing inward, toward the greatest threat to the land and its values.

Now, the wisdom I mentioned before came in two forms. First, it was the acceptance of what the sentry’s actions meant, and their realization that the greatest threat to what they most held dear was their own mistrust. Make no mistake – they were surprised by the result, but they acknowledged that their prayers and magic and skill had all contributed to what they had learned, and so they accepted both the discomfort and the truth. And the second expression of their wisdom was that eventually, someone fetched a seat for the sentry, so they could take a rest from time to time.