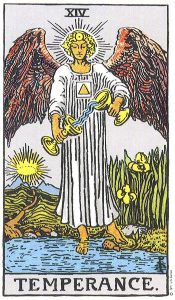 Once there was a person who had grown up in a place where no one really understood them. They were different, and they knew they were different, and what’s more everyone else knew it too, and went out of their way to point it out every chance they got. As a result, the person felt pretty lonely, in spite of others being around all the time, and they felt very boxed in, even though there was a wide world around them. One day they decided that if they were going to be lonely anyway, they might as well do that someplace else where they weren’t made to feel badly about being different. So they loaded up their backpack, put on their best boots, and left the village. They walked the old path through the woods and over the mountain pass, down the foothills, over the grasslands, and to the waters where they could at least be alone in the quiet, peaceful world.

They were therefore quite surprised to find an angel there standing there at the shore, with a brow furrowed in concentration.

Now, the person had really been looking forward to a bit of solitude, and upon seeing the angel they let out one of those silent sighs that are probably a lot more obvious to onlookers than the person sighing would like to think. Still, they knew their manners, and greeted the angel. “I’m sorry to interrupt,” the person said. “I was just coming down here to enjoy a little quiet away from…well, everyone. I can move on, though, if I’m a bother.”

The angel looked up with a smile. “Oh, not at all!” the angel said. “You can help me with my magic trick.”

The person was taken by surprise (as most of us would be, when confronted by an angel who is apparently practicing stage magic), and said, “I don’t really know anything about magic, but I guess you can show me the trick, if you want.”

The angel quickly plucked two yellow flowers, which turned into gold chalices, scooped up some water with one of them, and poured it into the other. That last bit may not seem that impressive, but as the water was pouring up from the lower chalice into the higher, it impressed the person very much.

“That’s…really quite amazing!” they said, “but honestly, I’m not sure what help you could possibly need. I mean, that’s a miracle, isn’t it?”

The angel thought for a moment. “I suppose it is,” they said, “but it’s really quite simple.”

“You’re defying gravity,” the person pointed out reasonably, “so I wouldn’t say it’s simple. How does it work?”

The person nodded, a very faint sense of understanding starting to kindle. “What if the water is alone?” they asked. “What if there is no other water about?”

“Then, I find, the water might do some pretty amazing things to find other water,” the angel said. “Cut through mountains, flow miles and miles over treacherous terrain, any number of things really, to find where it belongs and where it isn’t alone.”

The person looked back the direction they had come from. They saw the long trail, the endless grasslands, the rocky mountain peaks. And they knew, with a certainty, that they would never return there. “I suppose…people are the same way? That they seek other people like them?”

“Some do,” the angel said. “Brave ones, or restless ones, or ones who can imagine a place where they feel they belong even if they haven’t yet lived in such a place.” After a moment, the angel spread their wings, stretching them out like you or I might stretch before a bit of a run. “Well, I ought to be going,” they said. “If you follow the shoreline of this lake, I believe you’ll find what you’re looking for.” And with that, the angel launched up into the sky.

The person called out. “Wait! What about the bit with the flowers and the gold chalices?”

As they flew off, the angel laughed. “Oh, that? No, that part was magic!”