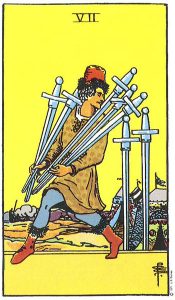 A very, very long time ago, gods were only just being created. Unlike today, where we think of them as being mostly fixed and ancient beings, back then the gods tended to spring up from the prayers of people who didn’t know what they were praying to. The gods came from necessity and sincere requests, and they were often more than a little surprised when they sprang into existence.

Now, this was a time of war, and the defending army was greatly outnumbered by the invaders, who had grown so confident in their coming victory that they were moving slowly through the countryside, certain that no defending force could stop them. They took their time, spending more energy planning their celebrations than actually fighting battles. The defenders eventually sent their best scout into the invaders’ camp to see if there was any weakness they could exploit. They weren’t expecting much, but if the scout confirmed the enemy’s strength, then at least they might return to their ruler to counsel negotiation rather than continuing to fight in a lost cause.

So the scout sneaked into the camp and began looking carefully for any information they could use. It became apparent that the enemy strength was as great as they had feared, and while the scout was no grand strategist, they knew intuitively that there was no way for the defenders to prevail in anything like a fair fight. “Best not to make it a fair fight, then,” the scout thought, and continued their search.

If anything, things got worse as the scout gathered more information. The defenders were outnumbered, and the invading army’s weapons were of much higher quality. Not knowing what else to do, the scout began praying to any god they could think of, but none of these deities had power that seemed particularly applicable here (and also, because the scout didn’t believe that these gods would answer, they didn’t). Finally, the scout – who was very worried now, and very tired besides – began praying to a god that didn’t yet exist. The Swordsneak, they were called, and their entire congregation (all one of them) called out for aid in this time of trial. And perhaps because this scout was particularly convincing, or perhaps because the Universe is a strange place sometimes, the god appeared.

“What aid do you require, child?” the god asked.

“Oh! I didn’t really think that would…” the scout trailed off, realizing that telling a newly-formed god that you didn’t think they really existed wasn’t a great idea. “That is, do you think you could make off with some of those swords, my Lord? Just the sharpest ones, mind.”

The god thought for a moment, realizing that the request was pretty well aligned with their name, and nodded. “And in exchange for this boon, you will spread word of my beneficence and cleverness to your people?”

“Yes, of course!” the scout exclaimed, discarding their original plan of taking credit for the whole thing and nodding as piously as they were able.

“Consider it done,” Swordsneak said, and set off about its work.

The scout (who was also the newly minted high priest of the great and powerful Swordsneak) watched as the god disarmed the invaders, tiptoeing away with their best weapons, and wondered how, exactly, they would explain this development to their generals when they returned to their camp.