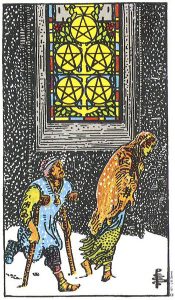 Once there was a priest who was regularly at odds with their superiors in the order. The priest believed that the church’s highest mission was to help people, whatever their faith, while the higher-ups felt that the whole point was to give glory to their god through the rites enacted inside the church’s four walls.

Both sides were entrenched in their positions, enough so that the priest’s superiors finally made a rule: the priest was allowed to assist those who came to their church for aid, but could not publicize that fact. This was presented as a compromise, but as the particular church the priest served was a humble building with little in the way of decoration, the priest knew from experience that few if any passers-by who needed help would think to seek it out there. The priest was frustrated by this, and was beginning to feel that they would need to leave their post. They didn’t want to – the priest truly loved the work and their congregation and the faith – but there seemed to be an incompatibility that was beyond their power to resolve.

Now, the priest had a friend who was very bright, and also a little bit sneaky. This is a good sort of friend to have when you’re in a fix that you can’t see your way clear of, and if you don’t already have a friend like that I highly suggest finding one as soon as you possibly can. Over drinks one day, the priest told the whole story to their friend, who thought for a minute and then smiled in the way that the priest had not-so-secretly hoped they would.

“That church of yours is a bit plain, isn’t it?” the friend asked.

“Well, yes….” the priest replied, not really sure where this was going.

“Maybe you should have some stained glass put in. You know, brighten the place up,” the friend suggested with an I am very pleased with myself right now expression.

The priest started to object, thinking of the expense and the difficulty of such a project, then sat back for a moment. At length the priest, too, smiled. “Oh, we do need some stained glass,” they said. “And some candles inside, burning through the night, so there will always be some extra illumination.”

The priest’s friend nodded. “To…draw attention to the beauty of the piece, naturally. Your superiors can’t argue with that, can they?”

They couldn’t, of course, even though they were rather surprised that the priest took to a project like this one with such gusto. Eventually the new window was unveiled, and it was quite lovely, full of images of the beauty and generosity that one might find in the world. And if that well-lit window served as something like a beacon for those who needed the aid the that the priest was allowed to provide but not to offer actively, well, that was a happy coincidence that the priest and their friend could chat about the next time they got together for a drink.