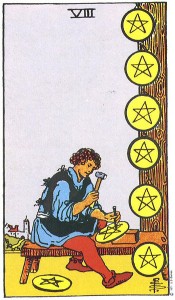 There was once a craftsman of such skill that the gods themselves took notice. Now, this may sound like a wonderful thing, to be so talented as to draw that sort of attention, but the gods can be fickle and jealous, and having their awareness can be a mixed blessing. In this case, the gods were arguing about who the craftsman served through his work.

The Smith, who held sway over machines and technology and tools made the first claim, pointing out the care with which the craftsman worked and the precision of each piece. When They worked at the divine forge, Their expression was similar, and Their work just as perfect. Obviously, then, the craftsman belonged to Them.

The god of beauty shook Their head. “No, look,” They said. “He creates with precision, but it’s beauty he serves. Even if each piece was never used, he would continue. He’s motivated by My domain, and so is in service to Me.”

The god of poetry had insisted on coming along, and spoke up next. They peeled back the craftsman’s heart and showed the others how it beat a little faster in those moments when the hammer struck the ideal spot, when the ring of its impact was poised perfectly between a bird and a bell. “He lives for that moment,” the Poet said, “not the result. He’s working a poem, in truth, and thus is My follower.”

More and more gods arrived, each staking Their claim to the craftsman. They all made a case by pointing out some aspect of the craftsman’s countenance or motivation or activity, and argued that he was therefore in Their divine service. The discussion became heated and began to draw some attention, and the god of wisdom brought Them all outside, away from the city so the argument could continue (while pointing out that the craftsman was similarly wise in acknowledging where his work might infringe on the people around him, and was obviously then dedicated to Them.)

Through all of this, the craftsman took no notice and continued his work with the same single-minded focus that he’d had since before the gods arrived and began arguing over him. While his work may have appealed to all of the gods, he himself took no notice. The craftsman, you see, was an atheist, and sometimes that’s the safest thing to be when the gods take an interest in your work.