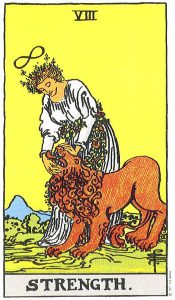 Once there was a Lion who went in search of a Lady to lure away from her home and out into the open plains where the Lion could easily catch her. The Lion was swift and strong, and clever enough to know that it would take some work to entice the Lady to follow. The Lion fancied itself very good at this, and in truth it was very good at this. It sneaked through the tall grasses almost like a snake, and danced closer to the Lady, stalking, and it whispered sweet and tempting words of what they might do together, if only the Lady would come a little farther out.

Now the Lady, for her part, was perhaps less strong and not quite as swift, but she was very clever, and knew exactly what the Lion was up to, with its sinuous movements and dexterous dancing and its enticing words. Still, she watched the Lion closely, because watching creatures and recognizing their beauty was one of the Lady’s many gifts. And so the Lion moved and danced and whispered to the Lady, and the Lady watched and considered whether she wanted to follow.

“Follow me here into the open plains, and leave behind the world you know,” the Lion whispered, and the Lady shook her head.

The Lion, who had never known a place for very long or loved it well enough to stay, shook itself so that its mane flew around in the breeze. “Come with me, where you and I can run, together,” the Lion offered in that way that suggested that ‘running’ was not exactly what it meant.

“Where I can run and you can catch me, you mean,” the Lady laughed. “I can play that game very well right here, and with partners who I am more likely to escape, should I not wish to be caught.” Her own tone and expression flashed a hint of her own hidden meaning, but even so she was resolute. “You’ll still need to do better.”

Now, the Lion was not old, but it was eternal. It remembered the Lady’s soul, in all the forms it had previously taken, and it knew its own soul – the unchanging truth of what it was, under the mane and muscle, and behind the luring words and sinuous movements. More importantly, it remembered their agreement, from that time before the Lady was a child and before the Lion first set foot onto the earth. And so the Lion took a deep breath into its remembering, and dug its claws into the earth of its knowing, and whispered once more.

“In the time before words and dance and living, you bade me come to you, and to remind you of what we can be together,” the Lion said. “And so I am here, for me as much as you, because I need to learn of love and place and roots as much as you need to learn all that I have offered you. Come, run with me in the grasslands and I will come and stretch out with you by the fire and together we will become magic.”

The Lion stopped speaking then, and the Lady watched for a long, endless instant, and then they each took a step forward toward their own completion.