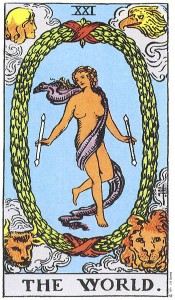 Once there was a woman who stepped through a portal to another world, and in so doing forgot all that she had done to that point. It was a part of the cost, you see – crossing to another world is hard work, and one must travel light and leave many things behind. She didn’t lose herself or what she had learned, though. Those things she was allowed to keep, for the self and our learning are surprisingly light when untied from the actions that led us there.

So as she stepped through, and those experiences all burned away, she became lighter and lighter, until the ground could no longer keep her tethered and she was free to float into the sky, to that other world.

As I think about her, I know that I am not yet free to rise and float as she did, but I wonder what I might do – what we all might do – to practice for the moment where we are ready.

What is the memory that holds you down, not tethering you to the ground, but pressing you flat against it? Is there a piece of that memory that can be released, thanked for its service, and sent on its way?

What is the lesson you have learned too well, that arrives, unbidden, to remind you of the circumstances that surrounded its learning, that makes your heart race and your teeth sweat? Can you cut away the parts of that story that have taken residence like an invader in your head?

Balance in all things, of course. There is a difference between being unburdened and unmoored, and some anchors keep us safe at rest through the long night. Still, it is a useful exercise, to release and to cut away, because the woman through the portal is all of us, eventually, sooner than we may think.

Best to do some practice now while we may.