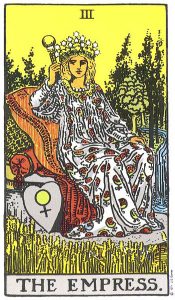 She arrives in dreams, always with the same question. That’s her function, her purpose. She appears from the mists of imagination and the depths of subconscious and the furthest reaches of fantasy and asks, “What if there is enough for everyone?” The question comforts some and frightens others, and in truth her purpose is neither of these things, or perhaps it’s both.

Those who are comforted say she is a being of hope, sent to their dreams to ease their worries. Perhaps things will get better for them if they have faith.

Those who are frightened say she is a deceiver, sent to spread pretty lies in dreams, to entice people to laziness or into revolt or (if their frightened logic is truly dizzying) both at the same time.

The comforted and the frightened each have one crucial thing wrong. She is not sent to their dreams, or indeed anywhere at all. She goes where she wills, always.

There are a few who dream of her and are neither comforted or frightened. Or perhaps they are comforted *and* frightened, and other things besides. Who can say what alchemy of emotions produces inspiration? Whatever they feel, these few find themselves awakening from the dream and changing the world. By raising that same question in the halls of power, or by behaving as if it is so in their own lives, by slow prudence or bold operations.

Those few who have the dream and hear the question and answer it through action are the ones she seeks, has always sought, will always seek. She blesses their sacred work with the only currency that truly matters: by continuing to ask the question, and inspiring them to do more.