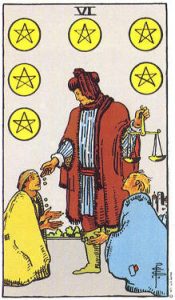 There was once a place called the City of Scales that valued fairness above all other virtues. As a result, when there were people in the city who needed help, there were programs to offer aid, which was all to the good, and those programs had many rules associated with them. After all, it would be unfair for the city to be swindled or taken advantage of by someone who claimed to need help but in truth was doing just fine, or could be if only they made different, better choices.

So help was available, with conditions. Some of those rules were:

1. In order to receive help, the person in question must work (even if there is no work) but not too much (even if the job pays little enough that they are still in need of assistance).

2. The person must not have any possessions that could be seen as luxuries. Even if, say, a good pair of boots is a necessity for getting around the city in the winter, anyone who can cover their feet properly may not really need aid. Note: The same goes for objects shared with or given to the individual by a friend or family member.

3. The person may be ill or injured in some ways (heroic struggles with lost limbs from war are acceptable) but not in others (turning to strong drink to dull the horrors of that same war is not acceptable).

4. When in doubt, ask this: How much shame does the person feel? If they seem properly ashamed of their circumstances, they they may qualify.

When all the rules were followed and the aid was given to the proper people for the correct amount of time and no longer, the people of the city nodded in satisfaction. Not that help had been granted, or that hunger had been abated, or that needs had been met, but that it had been done properly, with no chance that they had been fooled in the process. For you see, the City of Scales truly valued fairness above all virtues, including compassion. And so they created for themselves a world of perfect fairness and almost no humanity at all.