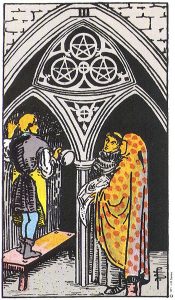 Once there was an artist who sculpted in stone, and had spent their life dreaming of a project worthy of the skill they believed that they possessed. It was an article of faith for the artist that they were capable of more than they’d been allowed to attempt in the past, if only the opportunity came about. The artist waited, patiently, for that opportunity, for their muse to appear.

Once there was a priest who dreamed of a church off such beauty that all who entered would be inspired by the experience. Inspired by god, or by what humans could accomplish, or by their own impossible divinity. The priest had never seen a place like that, but took it as an article of faith that it could happen, and they were resolved to manifest it if they could. The priest, too, waited patiently for that opportunity, for their deity to provide.

Once there was an architect who awoke one morning from the same dream they had each night – of archways and walls of stone, of practical structure and delicate beauty forged together somehow, as if by magic. They set about for a walk (as they did each morning) looking for a spot where their dream might fit perfectly, prepared (as they were each morning) to set the dream aside for another day so they could get back to the work that paid their bills. That walk, though, was important. It was the architect’s way of showing that they were open to the dream being true. Each step was a manifestation of their faith, and each step held the potential to open a door.

Once there was a Coincidence who had been working a lot of overtime. It saw the threads of dreams, but could only affect the dreamers when they woke. So the Coincidence knew the priest and the architect and the artist intimately, because their dreams were equal parts of a whole, and it was Coincidence’s purpose to throw equal parts near one another to see what happened.

Months later, the three of them would marvel at the divine intervention that had brought them together. It was Fate, obviously, or the artist’s Muse, or the will of the priest’s Deity, or the will of the universe that ensured that they would meet, and that this work would happen.

Meanwhile, the Coincidence had moved on to another project, so never heard this conversation. Their purpose was fulfilled the moment the three dreamers were in the same spot, after all.