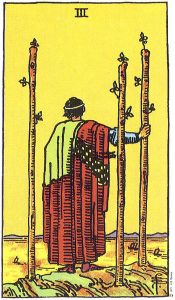 Once there was a person who had created an entirely satisfying life, full of good work and pleasant friendships and a little more of what they needed than they needed (which is, it must be said, a very good spot to be). They were aware of their comfort, but also of a growing sense of unease. Because for all the things of value that they possessed, they also possessed a sense of wanderlust, and their feet were itching for the feel of the ground passing beneath them. So it was clear, in the end, that they needed to go someplace, and this meant that they had to decide what to take along with them.

Perhaps unsurprisingly, it was very difficult to begin deciding what to leave behind, because all of those possessions really did have meaning. There were the books the person had read over and over again, and the art that had drawn their attention each morning, and the table they had saved up for months, around which their best friends had gathered for so many meals. So it was no wonder, really, that the traveler-to-be was having so much trouble getting started.

“Well,” they eventually said, thinking of how long the road before them was and how tired they might get even without extra things to carry, “perhaps I’ll take two things. That seems quite enough to carry,” but even as they said it they felt a twinge of sadness so they continued hurriedly, “or three, maybe?” The tension eased, for somehow the idea of taking three things felt abundant in a way that two hadn’t.

Now, the three things that the traveler took may be different from the ones you or I might. But they took with them what was most meaningful to them, which means that they knew what was most meaningful to them. They considered all that they had gathered to them in their years of living in that place, looking over their home and the closet and the shed out back, and eventually they chose three important-to-them things, and carefully packed them up.

So, armed with the lessons the books had taught, the passion the art had inspired, and the stories the table had witnessed, the traveler set out.