Tarot Stories #57: The Hanged One 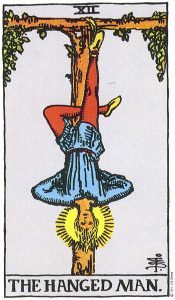 Once there was a man who feared complacency above all else, and was aware enough to know that it was a real possibility for him. His life was fairly comfortable, and he noticed himself starting to assume, from time to time, that things did – or could – work as easily for everyone. So he counted himself very fortunate when he stumbled across a god one day. Here was the man’s opportunity to ensure that he wouldn’t fall prey to that complacency that he feared! The man reached out to pluck at the passing god’s sleeve, saying, “Hey, I need a favor!”

The god was a bit nonplussed by this, as you might imagine, but they smiled sort-of-pleasantly and sort-of-dangerously and asked, “What sort of favor do you seek?”

The main replied, “I need to know how to avoid becoming complacent. You have so much power, and are worshiped by many, and yet you still listen to humans with our tiny concerns and needs. I think you may know this secret, and I could be a better person if I did, as well. Will you share it?”

Here the god paused, and considered the man’s words. They weren’t exactly traditional, but they did follow one form of a prayer, complete with praise, and awareness of the god’s power, and request for intercession. The god rethought the “smite” plan and shifted gears into “be careful what you ask for” mode instead. “By all means,” they said, and snapped their fingers.

The man hung upside down, bound by one foot, wondering just what he had done wrong. His voice was hoarse from shouting and empty threats by now, for it had been…well, he wasn’t sure how long exactly, but it certainly felt like a very long time. Eventually, after a period of quiet, the man, asked, more politely, “Would you please come back so I can speak with you?”

The god strolled out from behind a sapling as if they had been there all along. “I knew someone once,” they said, conversationally, “one of my kind, of course. Hung up on a tree like that one for nine days, and gained a lot from the experience.”

The man licked his cracked lips, moistening them just enough to respond, “And that didn’t kill them?”

“Welllll…..” the god replied, “that’s complicated, for us. They might’ve died, in a manner of speaking. But we don’t really have the knack of it, you know? Let’s say this. My colleague sacrificed themself. And they were transformed both by what they gave up, and by what they earned.”

“Is that what I’m doing up here, then?” the man asked.

The god laughed. “Oh, no. You, you’re getting a lesson. An answer to your prayer. That’s not the same thing at all.”

“I’m not really sure what I’m meant to learn,” the man admitted, “but I’m in rather a lot of agony right now, so I’m not at my best.”

The god shrugged. “You’ll figure it out, I imagine,” they said, and disappeared for a while.

Time passed, as it does. Since the man had sort of shouted himself out of shouting and spoken all the threats he could imagine, he began using this time a bit more efficiently, and took the opportunity to think. Eventually the god returned to find the man still in place. “Have you figured it out?” the god asked.

“Have I worked out what I’m meant to learn?” the man replied. “Well, not quite.” As the god turned to leave, he hastened to add, “But I have learned something else! You put me here in response to a prayer about avoiding complacency. Here, in a position like that taken by a god – another one, I mean. So I’ve been trying to figure out how I’m like that friend of yours, the god who sacrificed themself to this fate.”

The god nodded. “And how are you similar to my colleague, then?”

“Not at all,” the man replied. “They chose to be put up in this position with at least some idea of what they had to gain. I didn’t, so I don’t see that we have anything in common.”

The god waited, saying nothing.

“But I wonder,” the man continued after a time, “would you say that this other god was comfortable while they were up here?”

The god shook their head, the faintest twinkle sparking in their eye. “Most assuredly not.”

“Well, I’ve noticed that my complacency comes when I’m most comfortable,” the man went on. “So maybe if I make a point of sacrificing my comfort, I’ll be able to answer my own prayer?”

The god paused, considering this, and eventually snapped their fingers again, releasing the man from the tree. “I was going for ‘Be more polite to passing deities,'” they said, “but your lesson works, too.