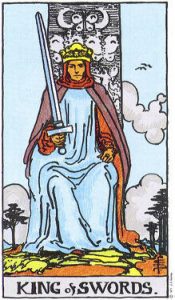 There was once an adventurer who had been traveling for a long, long time. It was a journey that felt even longer than it was because they had finished their adventure already, and this was the journey home. They had won the great war, or defeated the mighty serpent, or healed the heart of the lame god, or outraced the swift cheetah, or built the tower or torn down the tower or composed the perfectly exquisite song…the point is, what the adventurer had set out to do, they had done. Now it was time for celebration, recognition, and above all, rest.

So all in all, it wasn’t the best thing ever when the giant with the 15-foot sword and the 40-foot throne and the enormous golden crown appeared out of nowhere, right in the middle of the adventurer’s path.

“Who dares to challenge my domain and my rule?” the giant asked with a voice that boomed, and all the sounds of the world nearby fell silent in response.

The adventurer glanced around, just in case someone else had arrived while the giant was talking. Seeing no one, they sighed and said, “I’m not here to challenge anyone. Just passing through on my way home.”

“I am the sovereign of the air and of the winds,” the giant continued, “and I do not suffer liars here.”

“I’m not lying!” the adventurer insisted, looking a bit more closely at that very large sword and calculating how fast it might move. “I am not here to challenge you, great sovereign.”

The giant made a scoffing noise that sent the birds in distant trees flapping away in startlement. “I am the ruler of insight and of thought, and I can see deception and misdirection the way you can see the clouds and the grasses. Do not lie to me.”

The adventurer was getting exasperated by now. “Listen,” they said, “I’m done with my adventure. I finished the quest and am simply returning home. I have no quarrel with you, and I am not here to challenge anyone.”

The giant’s nostrils flared and the giant’s grip tightened and the giant’s gaze sharpened. “I am the keeper of stories and the cultivator of deeds,” they said, and somehow these titles seemed even more ominous than their others, “and I ask you one final time. Who challenges my dominion over these things? Name them!”

The adventurer looked around once more, and there were still no allies arriving at a conveniently fast pace to save the day, and no clever escape path revealing itself just in the nick of time. They thought about all they had done to get here, to the point where “home” was a place they might actually survive to see, rather than an idea they used to trick themself into taking on one more task. They wondered if news of their death here, still far away but at least heading in the right direction, would reach their loved ones.

They thought about the serpent, or the war, or the race, or the song, or the god’s heart. And they thought, too, of the air they had breathed and the insight they had been forced to gain and the stories they had written with these deeds. And these thoughts made them stand up a little straighter with the knowledge that whatever their intent, perhaps they had challenged this ruler, after all.

And, taking a breath they suspected would be their last, the adventurer met the giant’s gaze with all the calm they could muster, and spoke their own name.

The giant’s eyes narrowed further and, though they were sitting still, they seemed to grow even taller, looming over the earth itself.

“I’m a big fan,” the giant said, inclining their head and motioning, slightly, for the adventurer to continue. “Can’t wait to see what you do next.”

Tarot Stories #57: The Hanged One