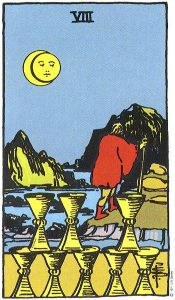 Once there was a person who hated leaving things unfinished. Whether it was a task like cleaning the house or something more fun like telling a story, they felt uncomfortable until the end, as if a part of their soul was missing and wouldn’t be made whole again until everything was put to rights. This made the person an excellent coworker, because they could be counted on to finish their projects, but a frustrating person to host a party with, because they simply could not leave cleaning the silverware for the next day.

Now, from time to time the gods or the universe or the fates would conspire to send a mortal out on some quest or other – sometimes for a noble goal, and sometimes for entertainment purposes. Seeing this person’s focus on completing a task, the gods (or the fates, or the universe) perked up and said, “Ah! Here is our champion to find the holy chalice! Many have failed, and they may as well, but at least we know they will never quit.” So the fates or gods or universe sent a dream to the person and planted the seed that they could not resist.

Once that seed was planted, the person left for their task almost immediately, beginning by doing all the research they could. They learned about the history of the artifact in question, its properties, and where it was seen last. It took a great deal of work, as you might imagine, but eventually they listened to all the rumors and read all the legends and ultimately found where the chalice had been hidden away. They brought it back to the shore that their dreams had shown them, placed it reverently on the ground, and nodded in satisfaction.

…And then they swore, quietly and creatively, because that sense of unease that came from a job left undone, a task left incomplete, was still there. Thinking that perhaps they had somehow retrieved the wrong chalice, the completionist left once more, returning to where their search had branched off, and following that other path, investigated clues and explored caverns and spoke with myth-spinners and eventually found another well-hidden chalice, imbued with holy power, and they brought it back to the shore where the other one still rested.

There was less swearing this time (though not much less), and still less the time after that, until eventually it was a simple sense of resignation that came with returning each holy chalice. What had happened, of course, was simple enough. The universe (or the fates, or the gods) didn’t make the chalice holy, but rather the belief that people had in the chalice and what it represented. And upon hearing a legend like the lost holy chalice of the fates (or the gods, or the universe), who wouldn’t imagine it to be hidden away nearby.

There wasn’t only one holy symbol. Perhaps there is never only one.

That mortal, they say, continues the work even now, leaning on a stout walking-stick and moving more slowly than they once did. They’re acting true to their nature, and the gods (or the universe, or the fates) chose their champion well indeed. So if you happen to come across an old traveler looking for a hidden, holy chalice, you might do well to aid them if you can, as a kindness.

And if in your own travels you come across a quiet shoreline under a bright moon, filled mysteriously with golden cups that glow with a holy light, leave them where they are. It’s taken more work than you can imagine to assemble them, and the questor’s labor continues.