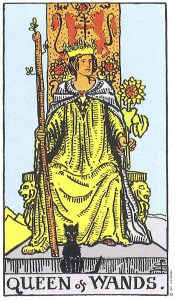 Once there was a traveler who came upon an imposing throne in the midst of their journey, where desert met stone. Upon the throne sat an even more imposing crowned figure, with a robe the color of the sands and a cloak the color of the endless stone. In their hands were a large sunflower, and an even larger staff, and at their feet sat a rather scraggly cat. The traveler, who wasn’t blessed with an abundance of caution, approached the throne in curiosity.

The cat spoke, because of course it did.

“What lesson do you seek from the sovereign?” it asked, and the traveler was at a bit of a loss, not having expected a challenge at all and particularly not from a cat. Still, they knew an opportunity when they saw one, and said, “Well, I’d love to know how i can get a beautiful gold crown like that one.”

“Really?” asked the cat. “Middle of the desert and the stone, a throne and ruler pop up out of nowhere, and you want to know about acquiring a crown, and for what? So you can sell it when you get to where you’re going?”

The traveler, who had been thinking at least somewhat along those exact lines, had the decency at least not to lie about it. “Well, when you put it that way,” they muttered, and then asked, “Can I try again?”

“I think you’d better,” the cat replied in the way that cats do, where whatever their appearance or circumstance, it’s clear that they expect proper behavior from all those around them.

The traveler, who was sometimes imprudent but not a fool, took their time, walking around the throne and the figure upon it, looking closely at each. Finally the spoke, and said, “I suppose I’d like to know what the sovereign had to work the hardest to learn, so that I can benefit from that experience.”

The cat started to bristle again, but then paused. This question was rather cat-like, after all (few cats relish the idea of doing work when someone else can be counted upon to do it instead) and was therefore quite wise. They nodded, and turned back to the figure. “If it pleases you to answer?” they said in a surprisingly deferential tone.

The sovereign looked off into the distance for a while, then turned to the traveler. “For a long time,” they said, “I worried that I was unfit to rule, that the gifts I had were of no consequence.” They gestured with the staff in their right hand. “And eventually, I came to realize that that which was within me – what I carried everywhere, no matter the situation or the place – wasn’t just worthy, it was necessary. And so at last I sat upon the throne with utmost confidence, certain that I could rule effectively.”

The traveler nodded. This was exactly the sort of thing they were hoping to hear.

The sovereign continued, “I had all my gifts, and brought them to bear on each situation, many times to good effect. But I came to learn that while what I had was necessary, it often wasn’t sufficient. Indeed, sometimes it was exactly the wrong thing for the moment. And so I learned – slowly, painfully – that what I didn’t have already would have to be cultivated.” They gestured with their left hand, raising the sunflower for the traveler to see. “Sometimes those gifts come easily with a bit of internal attention, but other times they need to be imported from elsewhere.” Here the ruler paused, and the cat purred. “The local soil needs to be worked, and tended, and even changed, over time, so that it is hospitable to the seeds that need to be grown, to eventually become the tools that are needed to face the world as it is.”

The traveler nodded again, more slowly. This lesson seemed like a lot more work than the first, and it had the ring of hard-won truth. “And what’s the secret, then?” they asked. “How do you know when your own gifts are the right ones, and when others must be cultivated?”

The cat purred, again, in an almost anticipatory way.

The sovereign didn’t laugh, but they smiled very, very slightly. “Well, that’s why you’re here, my friend, to help us figure that out. If you’re willing, that is. My advisor here will show you to your quarters whenever you’re ready, and we’ll get started tomorrow.”