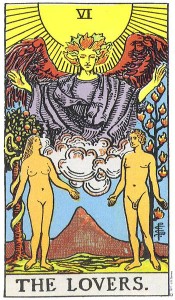 Once there was a god who knew all the things that were in the province of gods, and nothing at all of what was in the province of humans. Which is to say, broadly speaking, that the god understood creation of something from nothing, and of nothing from something, and of events that hadn’t happened yet being a prerequisite for a choice about breakfast, and of all the impossible things that first year philosophers bring up to make their mentors’ heads turn around backwards. And it means that, broadly speaking, the god was absolutely without a clue when it came to knowing the right thing to say to defuse a moment of unexpected tension, or when it came to being truly gobsmacked by the feel of an autumn breeze that was frankly very like all the other autumn breezes, even the one from yesterday, that hadn’t made an impression, or when it came to being so in love with one or three or ten other beings that a look from them could feel just as amazing (or at least almost as amazing) as that autumn breeze that the god was, as we have established, really hopeless at understanding.

So the god wisely (or foolishly) created a place where a few of these people could live, providing the god with a front row seat to observe these things, and to begin to understand them. It was a lovely spot, full of everything the people needed to survive and to live well. Naturally, it took barely any time at all before the whole experiment began to come apart at the seams.

“So here we are in this beautiful place, with all the food and comfort we could want,” one of the people said to another. “What I want to know is, what’s the catch?

Another person agreed. “Right! Whoever brought us here wants something, that’s for sure.”

They went on like this for quite a while, until finally the god arrived to set the record straight. “No, you’ve got it all wrong,” they said. “Just do whatever you want! This is your home, and you’re free to use it how you see fit.”

If the people were impressed or intimidated by having met a god, they gave no sign of it. Indeed, having the god there seemed to make them more skeptical. “But what are the rules?” one of them asked. “This sounds like a good deal and all, but there must be some rules.”

The god said, “No, that’s the whole point. I want to learn more about you, and I can’t very well do that if I go putting rules in place, can I? Really, anything you want.”

“What about food?” another person asked. “Can we just take anything?”

“Yes, of course!” the god replied. “Help yourself.” With that, the god disappeared, hoping that this would be the end of the questioning.

It was not, in fact, the end of the questioning.

“What about that tree over there? Or this fruit? Or those berries?” the person who had asked about the food in the first place (or maybe it was a different person; the god found it difficult to keep track sometimes) was walking around and pointing out every single edible thing nearby and demanding confirmation that it was permissible to eat it. The god played along for a while, but eventually they tired of the experience of following and saying, “Yes, certainly,” and, “Of course, feel free,” and after a few days of this the god had an idea. It was a very simple idea, and not necessarily a good idea, but desperate times called for desperate measures. The god would give the people exactly what they asked for.

“All right, everyone,” the god called out, and the people – both of them, or the ten of them, or all million of them (certain details such as the census were a challenge for the god) – looked up expectantly. “I am here to tell you the rules of this place.”

“Finally!” one of the people said, and the others nodded and muttered their agreement.

“Yes, well,” the god continued, “there is only one, so listen up. Everything here is yours to do with as you please,” here they paused, looked around, and picked one solitary and unremarkable tree at random,” except for that tree. All else in this place is fair game, but that tree is off limits. That is the rule, which you’ve all been asking about for some time now, so I hope this settles things.”

It did settle things, at least for a while. The people went about their business, and the god observed them as was the plan all along, and everything went swimmingly. Until one day – not so long after that one rule had been set, all things considered – the humans’ eyes began to turn away from all of the things they could have, and toward that one…solitary…tree. And they began to ask themselves, “Well, wait a minute now, why can’t we have that one? Are its roots not within this place that was created for us? Are its branches not within the boundaries of our home? Its fruit should be ours by right, shouldn’t it? And anyway, who is this god to establish rules for us in the first place?” Some of the people agreed with this point, while others said that one rule wasn’t too much to follow and they ought to leave well enough alone, while still others said that the rule wasn’t truly the only one, and they had discovered several others that they would be happy to reveal very soon (once they had worked out what they were).

And so it was that the god who had set out to learn things that were within the province of humans began at last to receive their education.