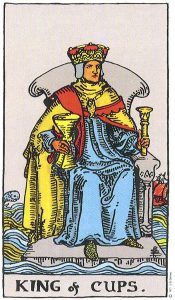 Once there was a ruler who had been at the job for a good while, long enough that they felt confident in their decisions and their ability to lead. This confidence was hard-won, as it is for most people (even those of us who don’t mete out justice or set trade policies), but the ruler had eventually gotten the hang of it and assembled the tools they needed. They held in one hand a large cup, to remind them to be open – to take on some of the burdens of their subjects, but also to take on only so much and to remain only so open (a cup is a useful metaphor for boundaries because it simply will not hold more than it is capable of holding). In their other hand, the ruler held a scepter, as a reminder that the decisions made were ultimately their responsibility.

So. Openness and power, boundaries and responsibility. It worked out perfectly – one tool, one reminder, for each hand. The ruler had figured it out, at last, and they felt very good about themselves.

Naturally, then, the next morning they awoke upon their throne, floating in the middle of the sea. “Well,” the ruler said, “now I know what happens to people who feel like they’ve cracked the code.”

The ruler could see, off in the distance, a ship turning in their direction. It was flying no colors, so it was impossible to tell if it came from an ally or enemy, but when you’re in the middle of the sea floating on a throne, it matters less who is making their way toward you in a position to lend aid, and more that someone is doing so.

As the ship approached, one of the sailors hailed the ruler. “Ahoy!” the sailor said, rather nautically, and then paused as they took in the situation. “What, um…well, what are you doing there?”

The ruler called back, “I am either learning about overconfidence, or I am dreaming a very strange dream.” They sat there calmly enough on their throne, waiting to see what would happen next. Now the sailor, strange as this might sound, was put at ease by this odd behavior. Being a veteran of their craft, they had encountered more than a few people driven mad by the sea, and this person floating on a throne in the middle of the ocean was clearly one of those. And in any case, the sailor’s task was clear. Helping a fellow seafarer who was in need (no matter how unusual their vessel) was as much a part of being a sailor as knowing how to work the rigging or to read the stars at night, so the sailor threw down a rope.

Now, here was a quandary. In order to climb to safety, the ruler needed their hands free, but of course they were occupied with the cup and the scepter. These were the tools they had found through seemingly endless trial and error, and which had served the ruler well in all their pursuits. Perhaps worse than the prospect of leaving them behind was the prospect of acknowledging that those tools, while excellent, were not correct for every task. Still, while the ruler valued their tools, they also valued their life. So, with some reluctance, the ruler set aside those hard-won tools (though not the lessons that had accompanied them, because those require no hands to hold), and began climbing the rope to the safety of the ship.

As they sailed off, the ruler looked over the edge of the ship and down to the throne, slowly sinking beneath the waves with the cup and the scepter, and they thought about two things: The value of releasing what no longer serves, and the prospect of having some pockets sewn into their robes.