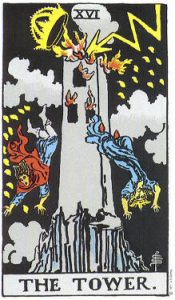 Once, upon the highest peak of the tallest mountain, there stood a tower that had been crafted – brick by brick, stone by stone – by all the moments of the builders’ lives. Every day they woke, and every action they took was in service to that construction. Often, these actions were good and thoughtful. They measured carefully before placing the next brick of a well-spoken compliment, or they considered the implications thoughtfully as they laid the stone of a shared joy. All of these things and all of the beauty and love of the builders’ lives went into that tower.

Other times, naturally, the tower was constructed of less perfect stuff. The day’s work might be a brick of petty annoyances, or a stone filled with unaware distraction or a sense of nihilistic resignation. But these bricks and these stones fit into place as well, and they made the walls of the tower just as surely as the small joys and great sacrifices.

Now, the builders did something that is very common among people who construct towers of this sort. They began to see the tower not as a thing that they were building, but as a thing that they were. It happens a lot, I think, because it becomes easier to see the tower as an almost inevitable construction than to imagine life without it. And that sense of inevitability, too, went into the construction of the tower. On the days when the builders didn’t imagine a life that wasn’t centered around that construction, the new bricks contained no imagination. And on the days when they didn’t ask why they were building the tower in the first place, they placed stones that were strong and certain, but also inflexible and unyielding.

(A small truth: There is a reflection of us in everything we make. But also, what we make is reflected in us.)

If there is a tragedy in the tower’s fall, it comes in the years before, when imagination or good questions are drained from its construction, or in the moments after, when the builders or their descendants resolve to reconstruct the tower exactly as it had been.