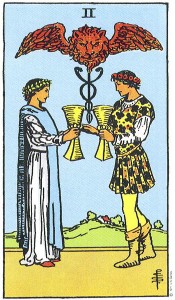 Once there were two people who had long kept their hearts hidden from the world. It wasn’t a conscious thing, mostly, just the sort of decision that gets made after a bout of heart-bruising, and then a little extra caution intended to help avoid that happening again, thanks, and then a shifting from intentional choice to ongoing habit, and there you go. Two people, hearts carefully hidden away, wondering why they had so much trouble finding friendship.

Simultaneously, these people each had a treasure that they were completely unaware of. They were watched over by spirits that wanted what was best for them, and in spite of what you may have read, that’s a pretty rare thing. One of the people was watched over by a great cat, full of passion and imbued with the sort of magic that drew others to them like a magnetic pole. The other person was watched over by twin serpents, who could slither unseen through the grasses and emerge transformed and radiant.

Now, two people who were connected to such magical spirits might have magic of their own, should have had magic of their own, but they had, unknowingly, locked themselves away from that. Say what you will about the working of magic, which may come with gestures and grimoires and incantations and (very occasionally) cauldrons and carefully selected children, the source of magic – or nearly all of it at any rate – comes from the heart. The same hearts that the people had locked away and kept hidden held that magic of the great cat with its magnetic pull and of the twin serpents with their stealthy, impossible transformation.

So the spirits had these gifts to share, and no avenue through which to deliver the gifts. Naturally, having no other realistic option, they cheated. You see, spirits of this sort are expected to work through the person to whom they are connected, or not at all. They’re not supposed to go acting as free agents, conspiring with one another in corridors and scheming together in corners. That’s simply not done, you understand…but still, desperate times, and besides, what’s the point of being a magical being if you can’t break a rule from time to time? The spirits spoke together and they realized that while they couldn’t act upon “their” person’s heart (they had tried, the snakes attempting to transform walls into open gates and the great cat working overtime to draw armor in on itself until it cracked and collapsed), perhaps they could work on the other one, just a bit. It would be difficult, and possibly illegal, but they resolved to try anyway.

At some point, then, a day or a week or a year later, one of the people was walking down the street when their heart fluttered and pounded a little, and at the same time they felt as much as heard a deep rumbling purr and a murmuring voice that said, “Around that corner is someone who will captivate your imagination, and in whose company you can bask.”

Within that same moment, the other person was also walking down the street and they felt a constriction in their own chest, just for a moment – startling, but not painful, and at the same time they heard a whisper in each ear, twin voices that said, “Around that corner there is someone, right now, who has long been hidden from you, and their friendship will transform your life if you allow it.”

Without knowing why, each of the people acted on the mysterious voices from the spirits of one another’s soul. As they each rounded the corner and met, they held their own hearts and beheld the other’s, and so they began to build a friendship and to rekindle their own magic.