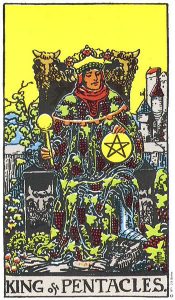 There once was a king who inherited both his family’s crown and their proclivity for acquisition. There wasn’t an object of beauty that they wouldn’t seek to buy, nor a marker of success that they wouldn’t find a spot to display as prominently as they were able. Theirs was an abundant realm, but more important than the abundance of the realm was the royal family’s abundance (or so the family believed, at any rate).

Now, this was certainly bad enough, but the family – and thus the king, as well – were absolutely terrible when it came to getting rid of things. So much so that there came a time when the king looked around the castle and realized that he could no longer hold court inside it. Every room – the throne room and the dining hall and even the attic that leaked when it rained – had been filled to bursting with beautiful art and family heirlooms and symbols of wealth that his family had cultivated and that he had contributed to. Obviously something had to change, and so he moved his throne, and the court, outside.

For years, then, the king continued in this way, conducting the business of the kingdom in the castle grounds. Eventually the grounds, too, were overrun with the abundant clutter of the king, so he doubled the guards on the walls (all the better to make sure that nobody came by to steal anything, and moved his court still further away, to the very edge of the ancient woods. He placed his throne there, right on the border between the clearing near his keep and the outskirts of the forest itself.

Now, this sounds like a story about a king, or perhaps a king’s family, but that’s not really what it is. What it is, is a story about the world.

A thing you need to understand about the world is that it can be slow to take notice of something, and slower still to take action. Slow as it may be, though, the world does notice, and slow as it may be, the world does, eventually, act. The forest noticed, some time ago, that the king had conflated his personal abundance with the abundance of the kingdom. Every painting or tapestry or jewel or piece of gold that he could hoard for himself, he did. And the forest noticed, too, that when this became untenable, the king expanded from his castle to the grounds, from the grounds to the walls, from the walls to the clearing, and soon enough into the forest itself. The king was, the forest knew, treating the wide world as a mere extension of his own gallery, a place to store and hoard and show off his wealth and power.

Forests don’t move, much, or at least they don’t move quickly, but they do move quietly, and when the king placed his throne within reach, the forest sent a few tendrils, a few roots, a few vines in the direction of that throne where the king sat. And when the king remained on his throne, contemplating his own wealth and his own possessions, the forest wrapped those tendrils and roots and vines around his legs, holding him fast. And when the king still took no notice, being so enamored by what he owned to open his eyes to the wider world, the forest bound him in place, there, and waited.

Now, you may assume that at this point the king would realize that he was trapped, and demand that the forest let him go. But the king did not do this.

You might expect that the king ranted and raved, and threatened and screamed. But the king did not do this, either.

If you possess a more generous spirit, you may assume the king, realizing belatedly that screaming and demanding obedience from a forest was not a winning strategy, asked kindly for the forest to reconsider its actions. But the king did not.

No. What the king did was sit, in his throne, looking out over the trees and the vines and the ripe fruit and the beautiful flowers, all of which he believed were his rather than belonging to the earth, and he imagined how many more treasures he could fit in that space, once he ripped all of that nonsense out of the ground. And he sat there, and he imagined that, even as the roots dug into his throne and cracked it into pieces and slowly, patiently, drew the king into its cold, quiet embrace.

The king is there still, sitting in an inherited throne, held fast by the world that he fancies belongs to him, somehow. And as for the world, and the forest? Well, they’ve long since forgotten about the king and his illusions.

On aging, gift-requesting, and receiving